I really, really want to try the betta sorority again.  I searched my house high and low, measuring this and that, and finally realized I could put a 20 gallon in my old TV entertainment center, which right now is holding a bunch of poodle figurines.  The TV is a newer, LED one and is actually mounted on the wall OVER the entertainment center so doesn't even add weight to it.
I will move the 20g that is in my living room over there, complete with my white clouds and loretto tetras, and I decided to get a 20L to put where that one is now.  That 20g is on a really shaky antique side table and I am getting a new poodle puppy on Saturday so I really need to get a more substantial stand for there anyway.  I priced stands and 20L tanks this weekend and was afraid I couldn't do it right now but I DO have to move that 20G off that shaky table!
Suddenly, I remembered the 29 in the kennel that had the baby Koi last Winter.  They are now way, way too big for that one and will be heading to the big pond in late August and I can use the 55g over there for the goldies.  Whew... free tank AND a great, solid REAL wrought iron stand.  It's currently some baby food processed pea color BUT I bought black paint for the back of the new 29 and never used it.  COOL!
SOO, after spending more than a week going round and round with that one, I also remembered the 29 is now EMPTY!!  Enter another ten betta girls!  I will keep them in a species only tank this time, and I actually have large, cycled sponge filters already in other tanks, just waiting for a new home.

And, I just realized...that stand is a DOUBLE STAND!!!!  Whooo Weeee!

If you need to sell some poddle figurines to make room let me know!

Ha! Slow down...breath! I'll admit, I feel your excitement! So great that you have the gear to set this up! Post each moment - I enjoy the step by step process! Be sure to post pics if possible of the transformation of the stand!!

Shell wrote:Ha! Slow down...breath! I'll admit, I feel your excitement! So great that you have the gear to set this up! Post each moment - I enjoy the step by step process! Be sure to post pics if possible of the transformation of the stand!!

I will certainly get some good color ones of the green paint... I can't imagine anyone wanting that color!!!!

I've been invited to bring Jewel to meet a litter of Standard puppies once they're born, they're only two hours away so I think I will. As long as I'm feeling strong that day. Ha!

Okay, today I painted the stand.  Here are before and after photos.  The tank I am using is behind the stand in this photos.  Unfortunately, it is TOO heavy with the gravel in it for me to lift so the project is on hold probably until Sunday when I can get some help.  Probably that is good for the paint to dry and age a bit!
Here is the green before (strangely, the camera actually makes the canned baby food pea green much better looking!) 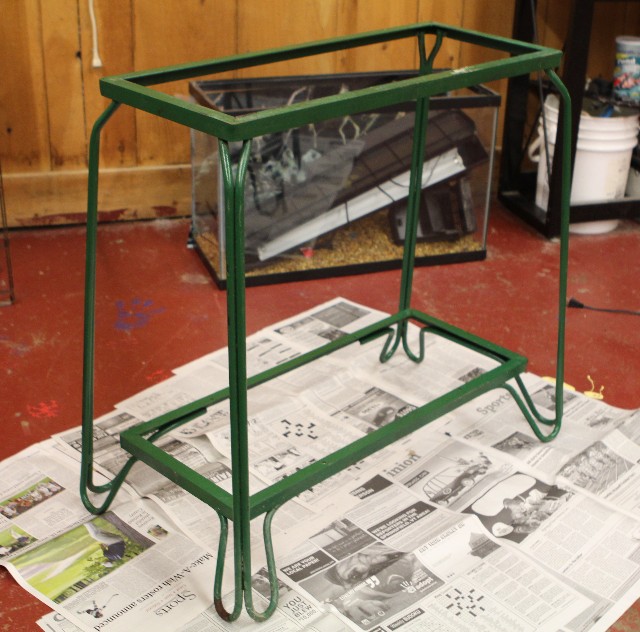 And, the new BLACK stand! 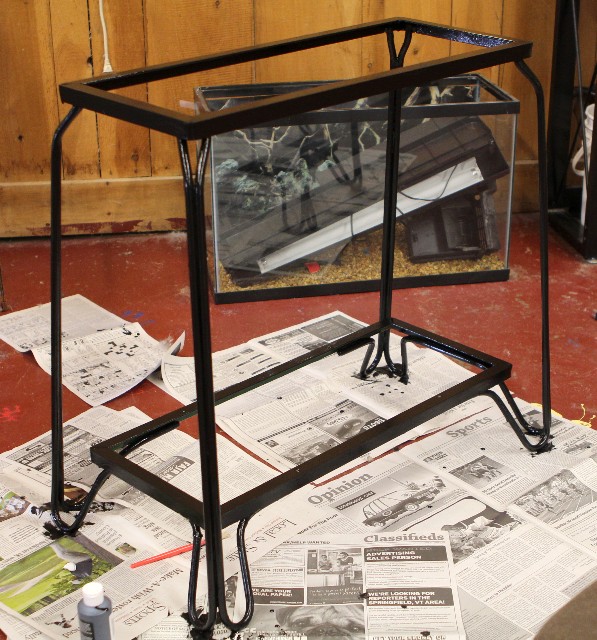 Sometimes I am really dense... I just realized that I don't have to worry about putting a heavy, 20 gallon tank on the entertainment center (and selling the poodle figurines, LOL).
I will put it UNDER the 29 on my new double tank, black stand.  Duh!
Krista, I somehow don't think you mean lots of photos of the fish tank, right?  Here is one for you now, at 7 weeks: 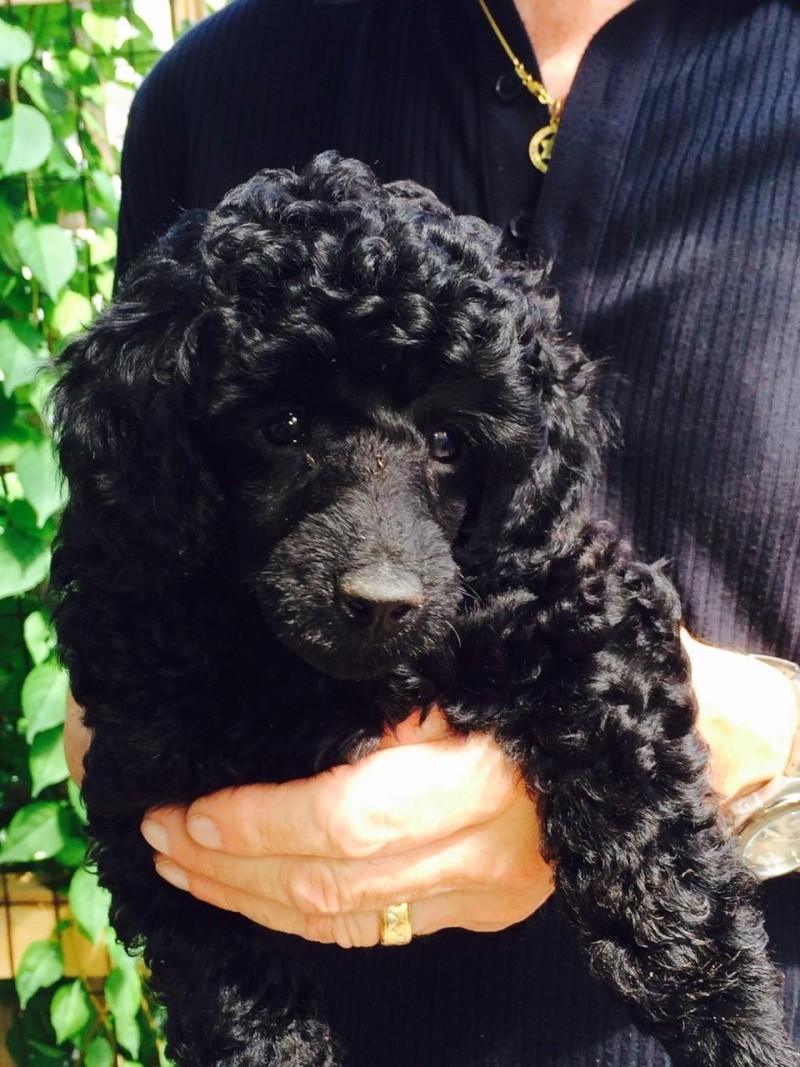 And with her brothers: 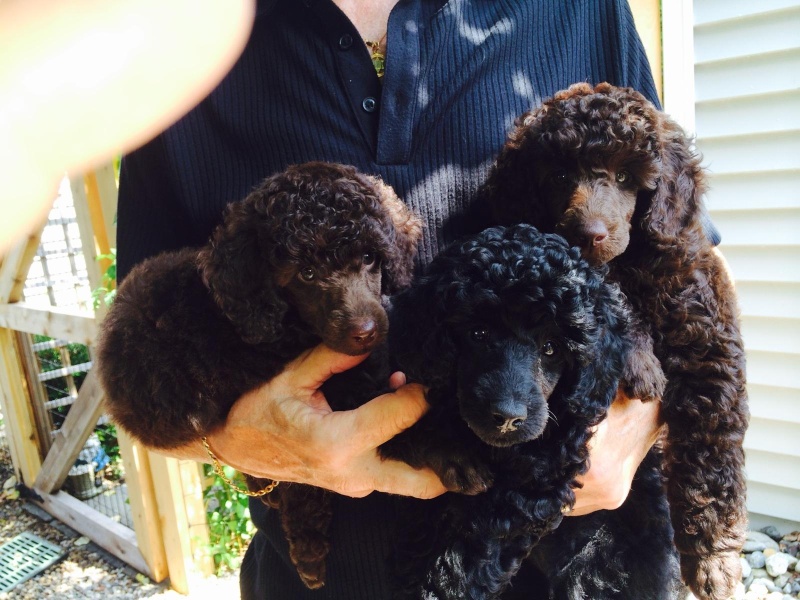 Wow, didn't realize they were so B I G... I save all mine as web sized.  And, I promise I will send the new photos of the baby, Angie, to Krista via email and not here!
Those two brown boys look just like their Grampy Chaz!!!

Cool stand, and good luck with the new tank.

How did this turn into a dog thread?

Sbenson11 wrote:Cool stand, and good luck with the new tank.

How did this turn into a dog thread?

Lets see...cool stand means dog is standing well at a show.  Good luck with the new tank means good luck with your new toooo fat puppy????  Does that work???

I don't think I can ever be in a thread with Evelyn and not talk poodles. SHE'S SO CUTE!! I'm hard crushing on a 3rd dog but can't afford one yet as I need to fix my basement and put up a new fence. So Angie is my filler puppy! Need pictures, I'll be emailing you by Sunday night if I haven't got any!!

Good job on the stand! By the time you have those new tanks up, don't forget about updating the number of gallons!

Aww poodles are awesome. Mine was a very memorable dog


Back to the stand - fantastic job with the painting - it looks sleek in black!

Ah Ha!!!  I solved my poodle/fish tank dilemma!  Here is a photo of the NEW entertainment center/fish tank stand.  Don't look at the fish tank, I just drained 90% of it and moved it. 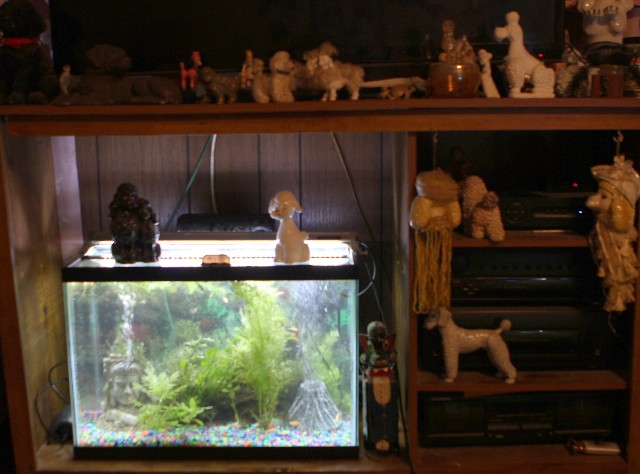 Tank? All I see is a poodle figurine display.

Oh wait I see it now, it was carefully camouflaged.

nyleveiam wrote:Ah Ha!!!  I solved my poodle/fish tank dilemma!  Here is a photo of the NEW entertainment center/fish tank stand.  Don't look at the fish tank, I just drained 90% of it and moved it.

Well, I got a 20L at Petco, under $35.  Had everything else, including cycled gravel and a cycled HOB filter and a large cycled Sponge filter so against my better judgment I also got 10 betta girls since they had them there and the Petco is 2 hours from my house.
Pretty much the same colors this time except they are all veiltails except one crowntail.  And, I couldn't bring myself to get another black and red one since I loved that little one so much.
I am assuming the cycled filters AND gravel will work... also will do extra water changes for a few weeks.
However, this time there is way more size differences and so far, lots of stare downs are happening.  I didn't have any of that the last time but they were in with other fish as well.  This time they shall remain alone.
BUT, they had an older elephant ear delta tail , kind of gray, red and bluish, but he has pretty massive fin damage... they are very white and tattered but I didn't see any black spots or any redness so I brought him home and put him in Berts 5.5 gal and moved him to Barts 5.5 and moved Bart into the tank with the danios...so far so good.
I need to not look at Bettas in ANY store, especially the P stores or even worse, Wally's world.  However, I will say these girls were ALL in immaculate pint holders.  The boys was dirty, well frankly, NASTY.
I gave him a good dose of Stress Guard and we'll see how it goes.  He ate brine shrimp and some of my daphnia.  That should help, too.  Also gave the betta girls a double dose of Stress Guard as well.
Photos later, right now I gotta go feed my new baby!!!!
AND, now I have that 29 gallon, filled and on the new stand but EMPTY!!!!  Semi cycled, has used filters and some used gravel but I have nothing else in there.  I also have NO IDEA what I am going to put in there!!!!
Just looked over at the Betta girls...gosh, I missed watching them, they always seem so peaceful, yet colorful.

Here's a photo of the two tanks.  I've at least got to get something like some plants and decorations into that bottom one tomorrow!!! 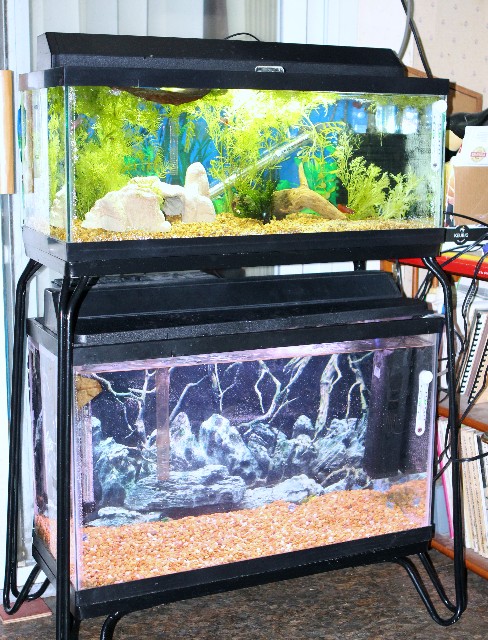 Oh no, you don't want to risk breaking any of those poodle figurines! Free storage at my place.

Looks awesome....like it was 'meant to be'

I added three blue rainbowfish and three dwarf neon rainbowfish. Should be a good number for starting. Later I will put some Boeseman's rainbowfish in with them and perhaps bring each number up to five. That should be plenty for that tank.

Similar topics
» What does your dream tank look like?
» Yeah! I have a New Tank!
» Seeking Advice for a New 10-Gallon Setup
» Tank planning
» New Tank Purchase