Wow, I was changing water this afternoon and noticed something moving in the Kribs cave.  I assumed it was just floating duckweed until Papa came out and the duckweed followed him!!
Gary, I got them two months ago, exactly, and honestly never figured to see any babies at all, but... you WERE RIGHT again, I CAN breed Kribs!!!!!
There are about 25.  Anyone care to guess how old they might be?  And, what do I feed them and do I leave Dad and Mom right there with them???  My first egg layer babies!!!!!!!!!!! 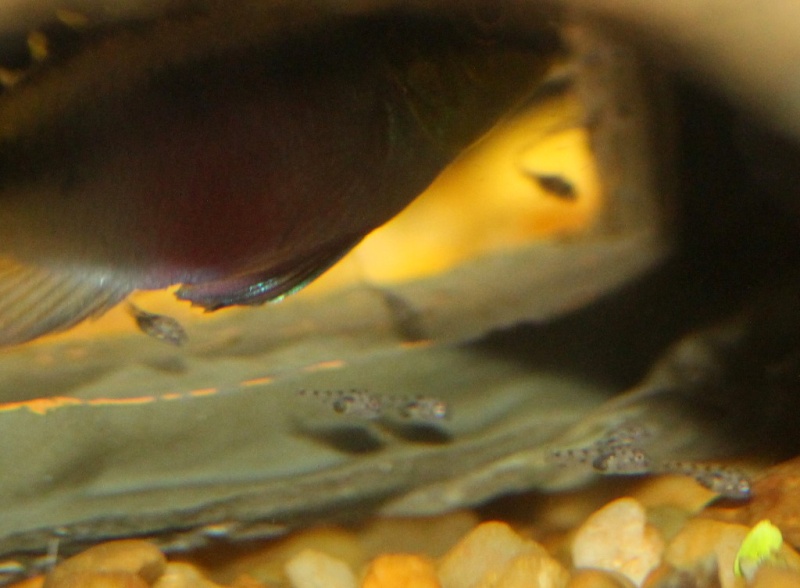 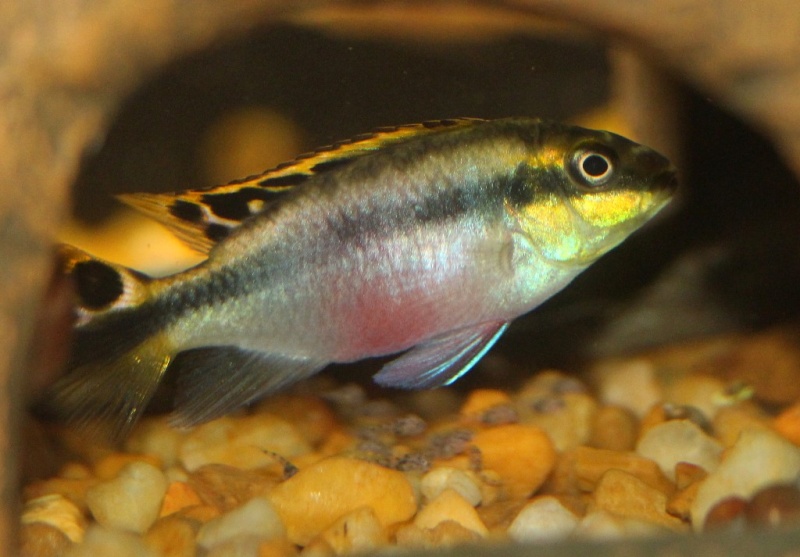 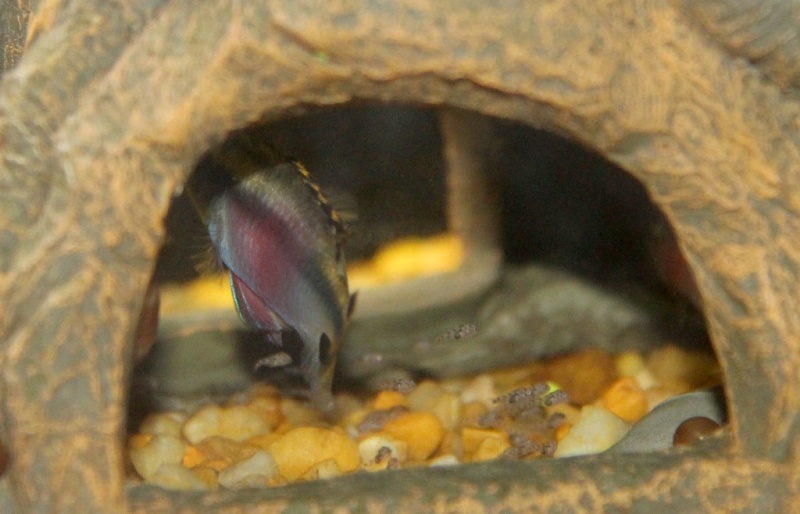 They are young, but only a few days. Crushed flake, artemia if you have it. I would leave them with the parents, but I would also pull up a chair and watch the broodcare. It's one of the greatest shows on Earth.

Wait til you see them picking the babies up, rolling them inside their mouths and spitting them out, all clean.

I'm already fascinated!!! Exciting and right at a great spot for me to watch!!!!!
There is a mild betta and eight x-ray tetras in with them. I noticed this weekend the betta had some serious nips out of his tail...now I know why!!!! But, even during the water change the betta and the tetras were acting perfectly normal for them and the tank is a 20 gallon long so there is plenty of room in there for the whole bunch.

Congratulations nyleveiam ! Krib babies are fun to watch ! I find that they have such a distinctive shape and the parents are good fry keepers.

That's awesome! Congrats on the fry.

These guys are soooo neat!!!!  I shall not get anything done at all in my house because I can't stop watching them.
Tonight I noticed the tetras and betta up in the far corner of the tank so I looked around and sure enough, Mom and Dad took the kids out for an evening swim.  AMAZING!!!  Sure are different than my live bearers who could care less about their offspring.
Of course, a few more photos.  1st is hard to see babies but they are on the gravel... this happened when I walked in to take photos!!!
2nd is after they all relaxed a bit. 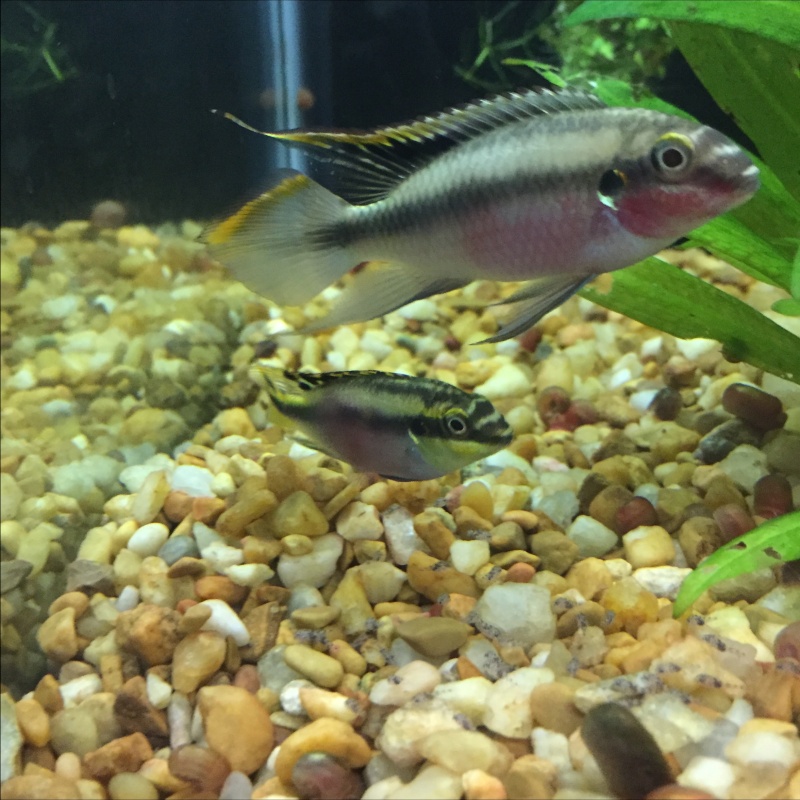 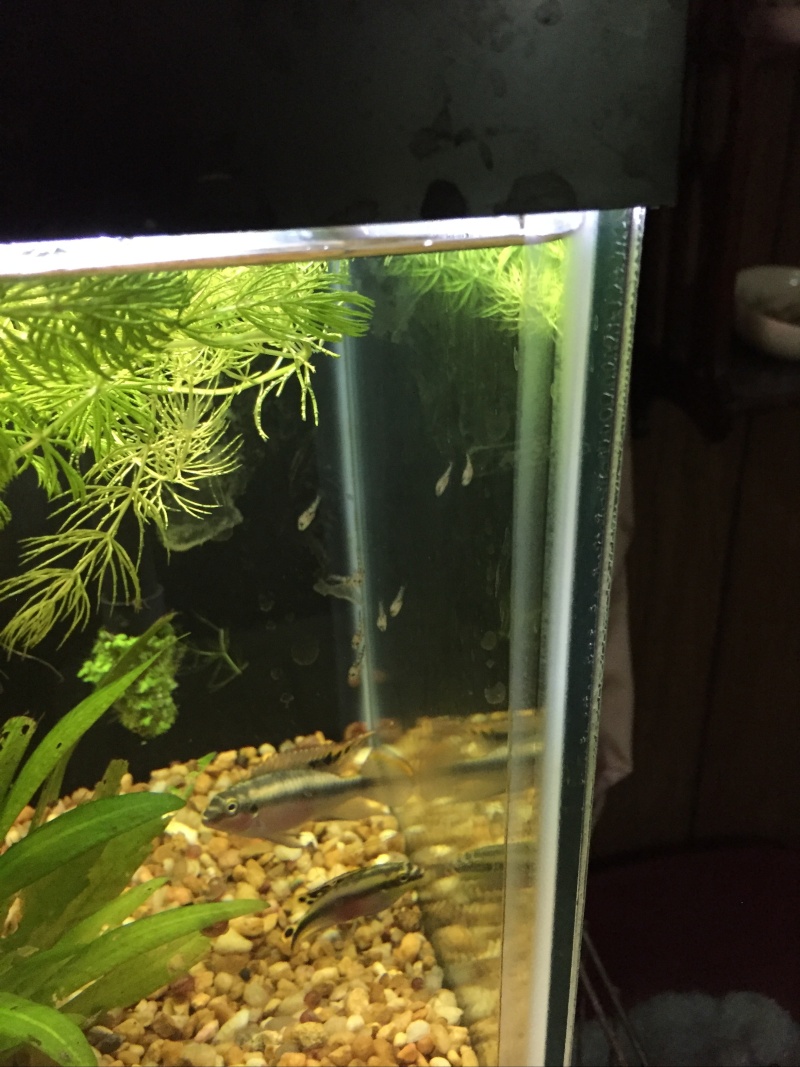 This is so incredibly neat! I have been lucky to see this once in Mexico. Hopefully now I am back my red kribs will spawn as well.

These are soooo fun to watch!!!  Absolutely  wonderful parenting at play and keeps me glued to the tank.
Tonight I watched dad going after the tetras and I don't am still trying to observe his signals to the fry.  If he is after the tetras the fry all instantly leave him and rush over to mom.  But, if he leaves for anything else, the fry all stay with him and follow along.  How is he telling them to stay or to come along?
Also today I guess they decided they needed a larger home so after first dad, then mom checked out the other cave in the tank they all headed over to that one.
I was surprised they didn't chose that one first because it only has one door...the one they started in is open on both sides.
I must say my tetras and the poor betta aren't so happy with the new family!

Great narrative! I decided today to separate my kribs. At first I thought my female was sick because she had a sunken belly but now I think she has been worn out and little to eat.

A good protein feeding perked her up immediately.

The language works two ways - there's the hidden language of chemical signalling, but the obvious one (once you spot it) of the pectoral fins. You'll see the pectorals twitch, and that carries meaning - they speak sign language. The mother is more obvious than the father, as her pectorals are well marked.

GaryE wrote:The language works two ways - there's the hidden language of chemical signalling, but the obvious one (once you spot it) of the pectoral fins. You'll see the pectorals twitch, and that carries meaning - they speak sign language. The mother is more obvious than the father, as her pectorals are well marked.

Well, just had a moments panic... I was cleaning glass on the front of my tanks and when I got to theirs I couldn't find ANY babies. I was surprised how upset I was...finally spotted ONE baby and that didn't help as then I really knew something bad happened.
Finally, I went around the side of the tank, put on my better glasses and, voila, there were all the babies hidden in the base of the sword plant. Whew!!!! I must have upset them working around the tank like that.

Little babies got freaked out.....hehe. Kind of remind me of Nemo in the fish tank at the dentist

Well, there are a few less babies BUT that may be a good thing????  I absolutely cannot believe the vivid colors of the parents!!  I thought breeding colors were to attract a mate but these two are getting more and more beautiful by the day.
Here are a few photos from today.  Babies are on the gravel and really hard to see in these two shots. I cannot explain why ONE photo is sideways, they are both exactly the same on my monitor and in the file so I have no way of figuring out how to fix it... stretch out your neck muscles a bit!! 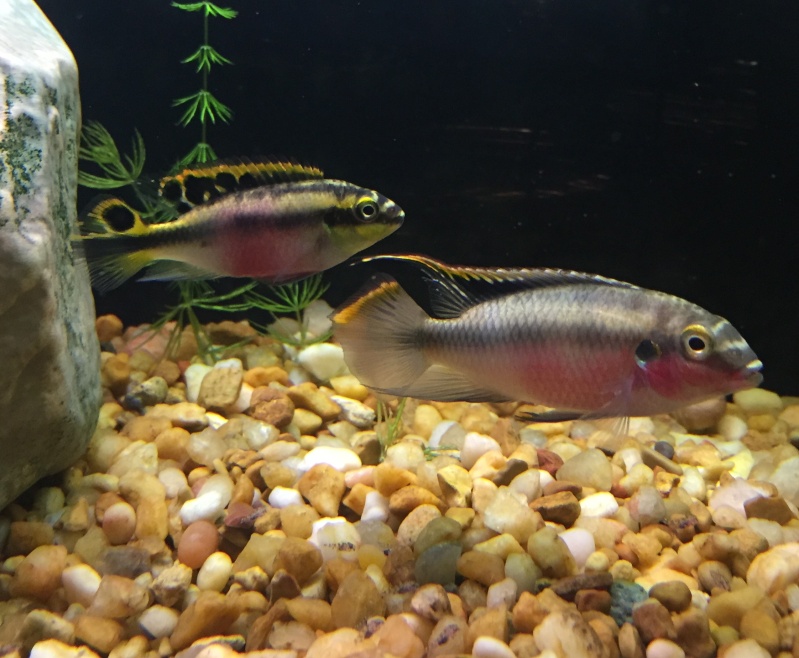 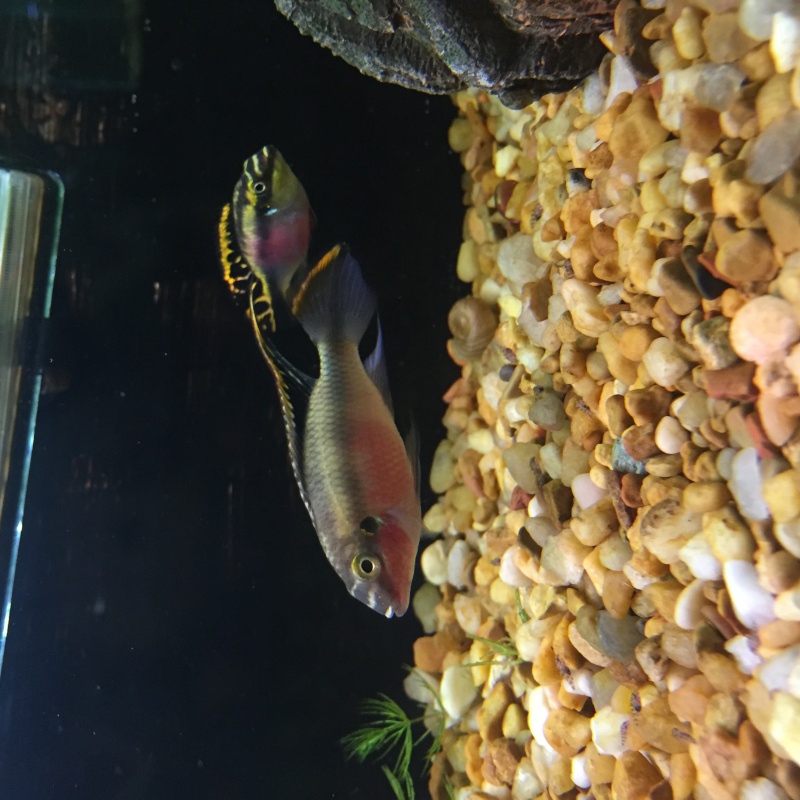 They look gorgeous and the male actually reminds me of my 'red' kribensis male.

I've been happily watching my Krib babies, secure in the knowledge there are only about ten of them left and I can certainly find room for them in my other tanks.
Well, just fed everyone and the ten babies came over from the side of the cave and started eating. Then, Dad came around from the back of the cave with another ten or so babies.
Next I noticed Mom in the cave, and since it has a front door and a back door I could see in there quite well and OMG, there are probably about 25 or so babies IN the cave!!!! And, this was after a water change so I guess I didn't suck too many up the siphon!
I was sure there were only about ten!!!
Those little guys are really getting quite big already and really chow down on the flakes. They didn't like the shrimp pellets the other night but these flakes are very much to their liking. Last night many of them found something they liked growing on the outside of the cave... they were really working it up and down and up and down.
They ARE cute. Now they have a LARGE black spot on their sides, in addition to the spots everywhere else.

Well, after just changing a tiny amount of the Krib tank water for the last several weeks I decided tonight I really needed to clean their gravel since I had overfed some shrimp pellets the other night and the gravel was cruddy.
I did manage to get it all done without sucking up any babies, I think! Frankly, at this point they are not the cutest things I ever saw. Except for the spots all over them, they remind me of plump maggots, UGHHHHH. They hang out on the gravel just like maggots would, too. Once in a while I will see some on the sides of the cave or against the glass and those do look more like fish than maggots, but... my Endlers are MUCH cuter!!!
I did have to remove the now tail less betta, and both Mom and Dad are missing most of their tails now, but otherwise they seem okay. Mom and Dad lost their tails from each other, believe it or not, but aside from grabbing tails they seem to be okay together.
And, Gary, I finally saw Mom grab one, roll it around in her mouth and spit it out. It was just after I did the water change so, of course, I was convinced she was going to eat it because I disturbed them too much. Nope, it wasn't hurt at all!

Just over a month old now and still have about 15 babies out of 20+.  Not bad!
New photos: 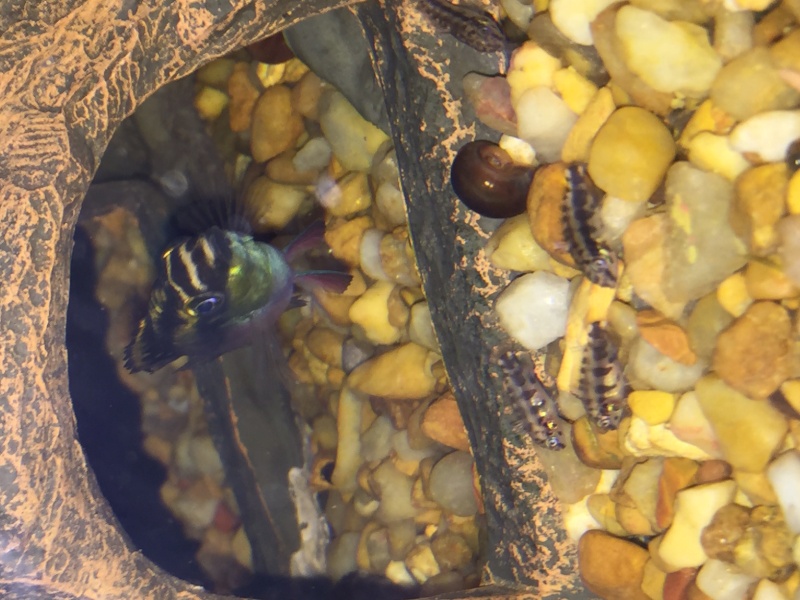 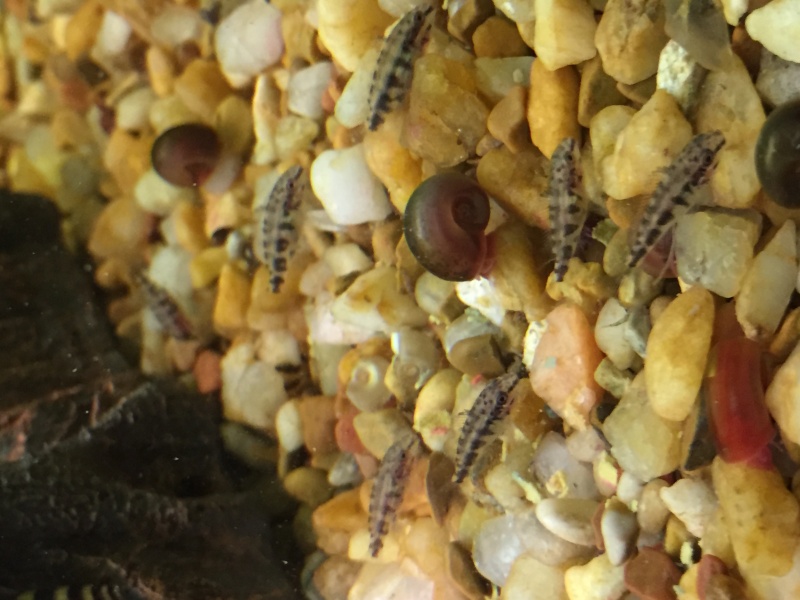 Sorry, I cannot make my iPhone photos come out right side up!!!!

They are growing very well! Are the parents still caring for them?

Yes, both parents still love the babies but they don't love each other very much.

nyleveiam wrote:Yes, both parents still love the babies but they don't love each other very much.

Maybe you should be happy with the latter, otherwise you might have another batch on the way already!

yeah, I do worry about that!!!  Do they have birth control for fish????  I was wondering what I was going to do with the fifteen still surviving last night!