My husband really wants to start a soil-based tank. I have heard and read mixed reviews on this. In some searches online, I have read that they can be very beneficial for fish. I, however, spoke with the owner of a fish shop who told me that they are a bad idea insofar as the nutrients are not compatible...or something along those lines! He said just to go with a good substrate meant for growing plants. We would like to start a fully planted tank, with plants growing both inside and popping out from the top...any advice?

I think in an ideal world it's best to keep them in groups. However, they don't get stressed out like a schooling fish does when they are by themselves. Others probably have more knowledge than me in this area but from what I've gathered it's ok to have just one. Mine doesn't exhibit any behaviour that would indicate otherwise (hiding, not eating, stress). He is always swimming boldly at the front, comes out to see me when I come near the tank and is growing like a maniac.

shell, then perhaps you should get just one angel?

Ok been watching this thread since it started and have yet to throw in my useless opinion lol. So here it is I believe there is lots of different kinds of tanks theme based, but only two types of tanks your working tank and your viewing tank.
So now my preference and thoughts on a viewing tank is definitely a planted tank and the easiest and eventually lowest maintenance planted tank is a soil based tank. Some reasons point form...
- I don't have to use as much fertilizer
-almost any kind of plant grows way easier in a soil base
-if done a certain way there is no mess when planting or unplanting
-we don't have to gravel vac this is huge
-and once there is enough plants to take care of nitrates I don't even have to do water changes anywhere near as much just let the evaporation happen and top up accordingly

When you "just let the evaporation happen" you do get a build up of minerals and chemicals in the tank. When water evaporates it is just pure water - the minerals stay behind. Letting it all build up without a proper water change will affect your chemistry and the fish's long term health and also new fish added.

Ok s4p I never stated that you didn't have to do water changes I simply stated that you don't have to them as much with a fully planted tank.
As far as just adding as needed after evaporation in order for " the minerals and chemicals to adversely affect the long term health of your fish or newly added fish" you would have to do this for along time with no water change which again I never stated to do long term.
Along the lines of water changes this is still a very highly debated topic on how often and how much water keeps your fish in there best health long term with so many variables such as if there's plants and how many along with so many other things we can't even begin to debate this without laying down a lot of the variables.
From reading and observing that with fully planted aquariums less water changes can be done without any adverse affects. Also in that time I have read that adding water as it is evaporated is actually healthier for the fish then just allowing it to evaporate and doing nothing until the next water change.
if you want to take it all to extremes and without ANY water changes yes s4p you are absolutely right about those facts but I never stated such an extreme.

I think you can go a little lighter on water changes with a dirt/planted tank, but it isn't a magic bullet, as Trixie says. I agree with the posting above 100%, but I'd like to throw out another element.

There is a group of dirt tank enthusiasts who believe in no water changes - just topping up. Several of them have followings on other forums, as they say what people find convenient to hear, and they are true believers in their systems.

They work off a natural system, although they generally refuse to discuss the possibility. In rainy season/dry season environments. fish get trapped as rivers evaporate. Pools form along river beds - some the size of small lakes. As they evaporate in the sun, fish become crowded, and birds feed on them happily. The fish reduce their activity levels and enter a holding pattern. They do have adaptations that give them a chance to hang on til the rains free them from the dirty water, low oxygen levels, hunger and danger.

if you go with the no water change system, you emulate that - your fish become less vital to conserve energy, less colourful to avoid birds and insects, and will stop breeding activity or courtship. They hover, and they wait. In many cases, they will slow or stop their growth. It's natural, but I'm not sure I want to mirror it.

You can choose carefully and go for swamp species if you really see this as a way out of the work (I know that's not your motivation, but the true believers in dirt tanks being natural systems are out there, and I want to get my point in first!). There are species that hate water changes, although they tend to be hard to get as they are slow moving, small creatures.

I'd keep the water changes coming anyway. Be the rain and current. As long as you don't disturb the bottom, it adds to the tank. You spend more time in a week cleaning up after a cat or walking a dog than you do changing the water for a month in a fishtank.

I really can't imagine never doing water changes! I suppose, however, it makes sense that you could do less of them with a fully planted tank; but knowing me, I'd likely still stick to our weekly routine - I guess I'd have to play it out and see.

I have a fairly heavily planted dirt tank that has been running for about 4 months and I am still doing water changes twice a week. I firmly believe it keeps my fish happy, healthy and growing. I also recently treated infection with more frequent water changes (no meds) and they cleared it up in three days or so.

hello_rockview12 wrote:I have a fairly heavily planted dirt tank that has been running for about 4 months and I am still doing water changes twice a week.  I firmly believe it keeps my fish happy, healthy and growing.  I also recently treated infection with more frequent water changes (no meds) and they cleared it up in three days or so.

I am with ya there, though I'm a once a week wc kind of gal

It would be pretty neat to have a tank that did not require the weekly wc - even once every two weeks would be so "easy"...but, I'm not sure I could go that long...my paranoia would kick in pretty quick!

I will warn you though, the term maintenance free can be very, very misleading. The balancing of light/algae/nutrients/co2 or excel can be very frustrating. It's a trial and error kind of thing until you get the right combination. I'm currently battling an algae outbreak that is starting to choke some of my plants out. It can be frustrating.

hello_rockview12 wrote:I will warn you though, the term maintenance free can be very, very misleading.  The balancing of light/algae/nutrients/co2 or excel can be very frustrating.  It's a trial and error kind of thing until you get the right combination.  I'm currently battling an algae outbreak that is starting to choke some of my plants out.  It can be frustrating.

Our planted 10g (mosquitofish and snails) is currently going through a horrific algae outbreak - it looks disgusting in there. I have been changing up the lighting, feeding, and nutrient routine for days now...no fun!

Regarding dirt tanks and water changes: in Tom's journal you can read that he regularly leaves for several months and only does top offs. However he ensures a lot of flow and surface agitation to promote CO2 exchange for healthy plant growth.

Try turning those lights down people, most aquatic plants are shade plants 4 or 5 hours of light tops

or break it up for two hours in the morning, that's when your plants want the light then another few hours later on in the day

the dirt guy wrote:Try turning those lights down people, most aquatic plants are shade plants 4 or 5 hours of light tops

or break it up for two hours in the morning, that's when your plants want the light then another few hours later on in the day

Take a deep breath, I am about to ask a silly question

it depends on the brightness and power of the blue lights. However I think I noticed some excessive Algae growth with my blue lights on 24hrs.

My plant lights ( CFL,s ) are on 2hrs morning 3hrs afternoon, I work all day so I also run a low watt incandescent at night 6-11 so I can still see the tank when I get home

You only light for 5 hours total a day? Wow, is it to keep your parameters in check?

Interesting! Tom has a Kessel above his tank; I cannot call that low light... I think the trick is in the CO2 exchange. The large surface area and agitation of the surface allow for more CO2 exchange than in a normal sized tank. And mostly CO2 is the limiting factor for growing plants, and a lack of this also causes algae.

Well, with our newest disaster in the basement (major water damage in the walls and floor!), it looks like the dirt tank will be in the distant future! I suppose it is good that this happened before we set it up as it would have been right in the middle of the water damaged area. I just hope the damage hasn't made its way into the fish room/office!!

Okay, we are back into at least 'planning mode' of a fully planted tank. Once the renos are done we are still considering this - thinking of going with something like a 40 long breeder tank, or something else long and not too high. I have a good idea of the aquatic plants we want inside the tank, but are there any suggestions for plants that grow "out of" the tank (i.e. above the waterline)? We really want the best of both worlds with this one...plants inside and out!

Almost all amazon swords are bought in emersed form. Just buy a type that grows tall like argentinensis or americanus. It will give a great effect. 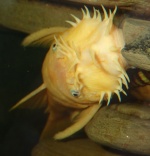 Similar topics
» Acclimatizing fish to a dirt-based planted tank
» My Maple tank
» New tank, need some suggestions...
» Algae in one tank but not the other?
» Something weird in my tank