Would it be safe to use a plastic pitcher as a cave for a tank, hopefully for my female pleco?
Would it be safe from leaching anything? It hasn't been used for anything other than tank related business prior to running the new 125G tank.
I have the koi & fantail there now.

Second question, the 130G tank is home to a big male & I larger female pleco & am wanting to know, should I split them up?
The male is always pushing/chasing the female to the point I rarely see her eat.
I want to move her & one ID shark to the 125. But if splitting the plecos up would be bad, I won't do it.

I guess it depends on what type of plastic the pitcher is made of. There is a lot of plastic used in tanks such as fake plants and other decorations. Rubbermaid plastic containers are used as tanks. But there are also plastics that leave a smell if liquids are left in there too long. I am thinking of athletic water bottles, if the water sits too long it takes on a plastic flavour. That kind of plastic may not be suitable.

I don't know that much about plecos, but I don't think they mind being alone. I have 2 bristlenose in my 75 and they never interact. I doubt they would miss each other if they were separated. If your female is being pestered, she might prefer to leave the bully.

These are just my speculations. Hopefully someone else will have some more advice.

The plastic pitcher came from A Dollarama or a Giant Tiger, forget which. It's not coloured either.
I currently do not have a cave for the female to hide in, but is it really a necessity as she never really uses the one in the other tank as it is.

I don't think I would trust anything from the dollar store to put in my tanks. That would be the cheapest quality of plastic. What is it that you have now that she does not want to use? I am trying to think of another option that would be big enough for your large plecos that would be relatively inexpensive. 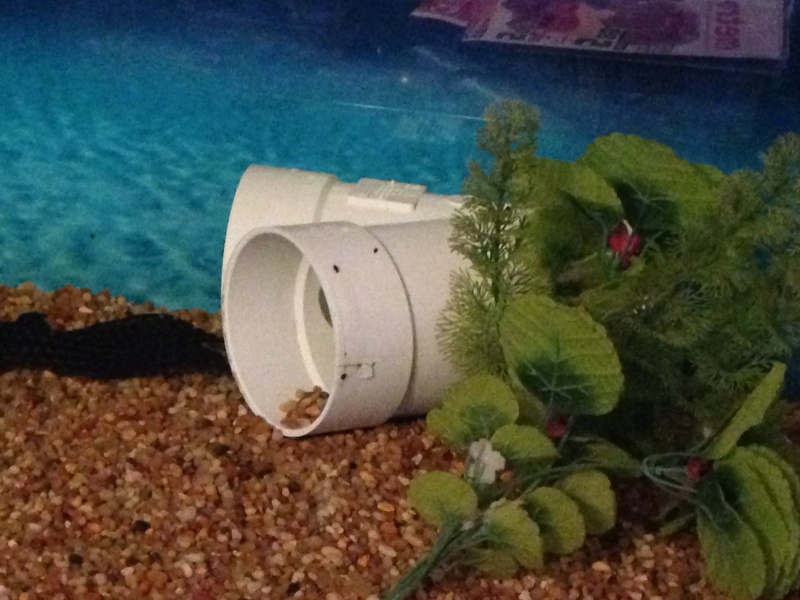 Try a terracotta pot there not very expensive

That kind of piping was what I was going to suggest, but looks like you have already tried it. My other suggestion was a terracotta pot like the dirt guy suggested, although I have a little one for my bristlenose and they never go in it. Other people have fish that love them.

My male pleco uses it now & then. But the female seems to prefer to lay on top sometimes.

Hey, Sandman, what is the name of that substrate??? I really like the size of it!

nyleveiam wrote:Hey, Sandman, what is the name of that substrate???  I really like the size of it!

We bought that tank (130 gallon) used & the substrate came with it. So we don't know, sorry.