My son wanted a pet and cats or dogs are out of the question so we got him an aquarium for his bday, that said I find I am enjoying it as much if not more than he is...lol

That said while I have enough experience with other animals, grew up on a farm, I don't know much about taking care of fishes and other aquatic life forms past catching them in a river and...well lets not go there ..lol

I bought a 10g Marina tank kit.  It comes with the 10g tank ofc and a slim s15 water filter system with LED lighting on the cover, only other thing I can find about the light is that its an "LED natural daylight effect enhances fish and plant color".

I bought two thermometers, one with suction cup that stays in the tank for quick daily checks and one I use for weekly water changes. It also came with some fish feed (nutrafin flakes) which I am not using and nutrafin aqua plus water conditioner and nutrafin cycle biological supplement.

I also bought, on the advice of pet shop owner, fluval water conditioner and fluval micro nutirents for plants for when the nutrafin stuff runs out and because I have two live plants in the tank. I also bought a marina gravel cleaner.  I also bought nutrafin basix blood worms for the beta and some pellets though he doesn't seem to fancy the pellets all that much.

When I first got the tank I set up it up, put in the water followed all the instructions about water conditioner and all that and put in the gravel, one plant and one russion ball I think its called along with a sunken ship deco and a couple big rocks and let the tank run for two days before adding the beta which my son chose at the pet store.

I also bought another plant and snail and a cave deco the beta could go hide in. Put them in and all went well, did the slowly adjusting Mr Henry the beta over the course of one hour but had a mishap with the snail..... his bag slipped out of my fingers due to it being wet and fell like five inches down and hit cover of the aquarium which was on the table where the tank is set up.  Poor fellow seem to have a round chip on the tip of his shell that cracked/broke...I feel terrible every time I look at him and see it...I thought he might die after a couple weeks but he seems fine so far!

Here's a pic of the products and gravel cleaner: 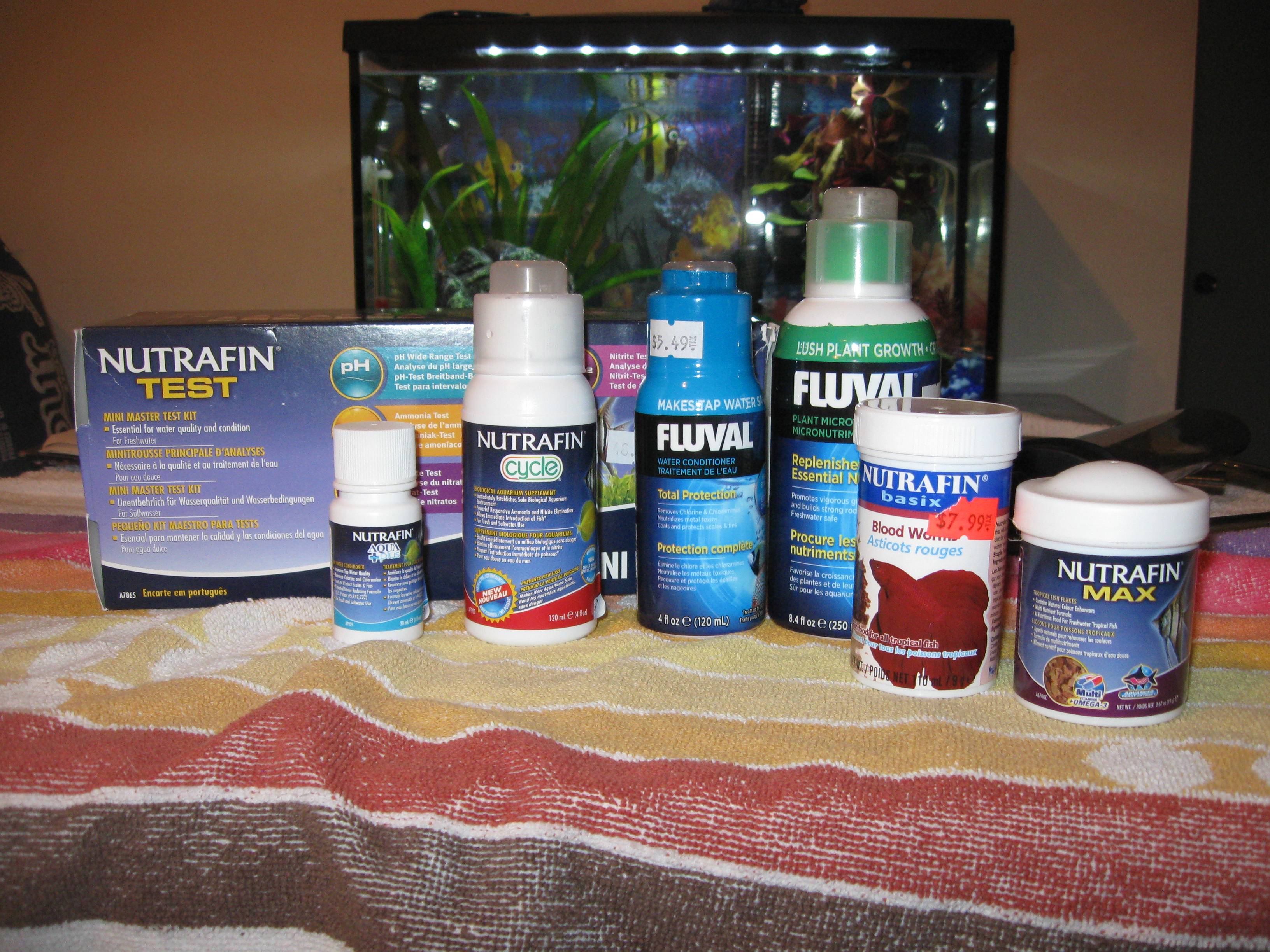 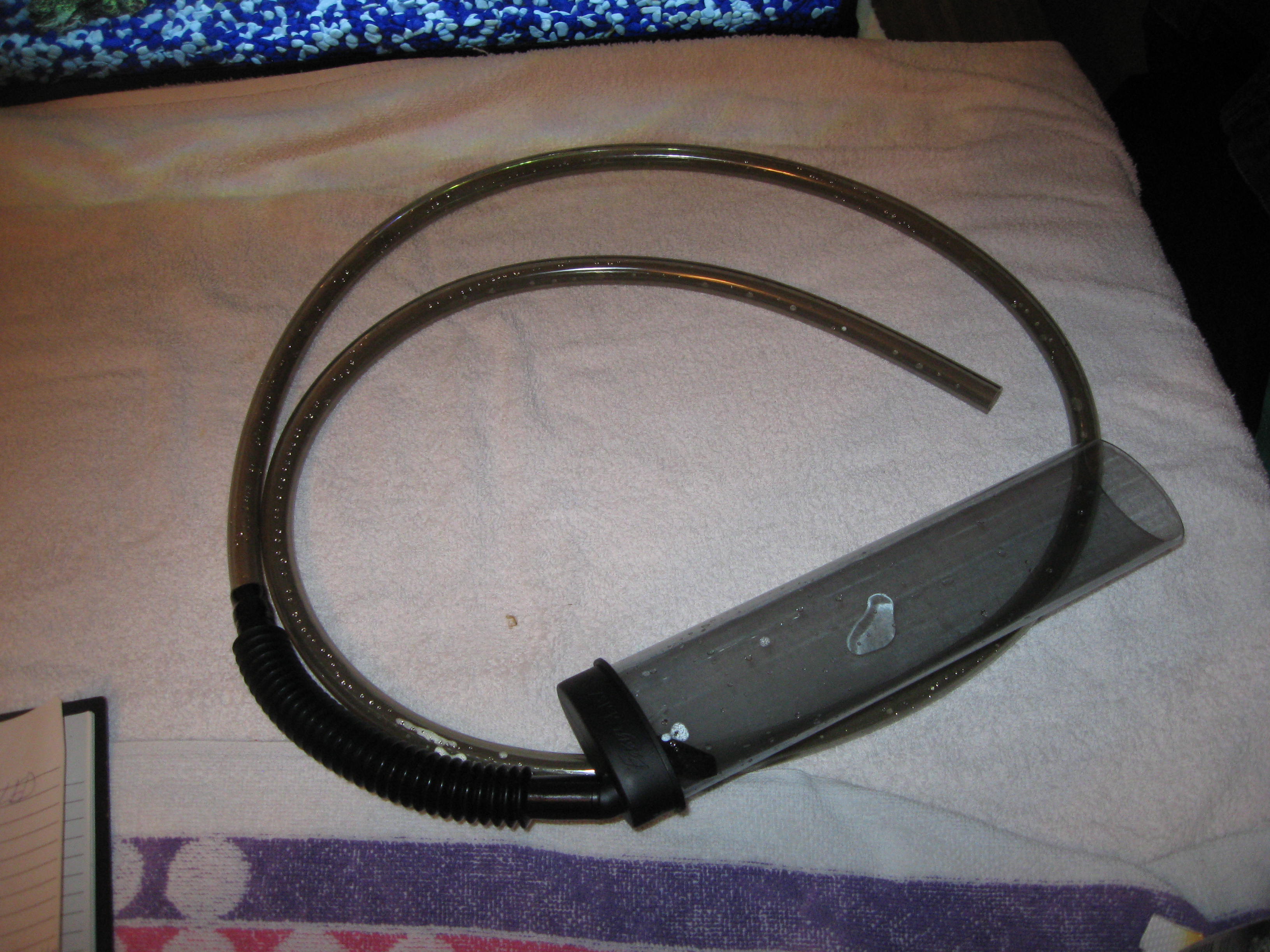 It's now been three weeks since we started this aquarium and all seems to be going okay. I have a few question though.

I seem to have some leaves of one of the plants going brown which I assume is algae as some of it came off when I gentle rubbed it with my fingers and one of the plants seem to have  a few holes here and there on the tips.  I trimmed the one with holes when I first put it in as it was too long and just now have trimmed both plants as they were sticking up out of the water.

What should I do about the algae?  Is one snail not enough to keep that down? I thought of buying another snail but my wife says she doesn't a bunch of baby snail everywhere so what else could I put in with a beta?

Also what kind of plants do I have? Can anyone identify them from the video and pics I will put up at the end of this post? Same for the snail what type is it?  Guy at pet store told me it was a non plant eating type but didn't specify more than that.

For the plant micro nutrients I was told to put half the dose the bottles says since my tanked doesn't have lots of plants, so I have been putting 2.5ml weekly.

Also what about my lighting, I was told this was enough for the plants I had but I see others get all kinds of fancier lighting systems so is what I have enough for the plants?  I also have had the lights one from 7:30am to about 7:30pm which I am guessing is probably too much and the cause of the algae?

I am thinking of lowering lighting down to 8 hrs a day is that okay for the snail and beta..how much light do they need, do they even need any at all?

For the beta I think I have been over feeding him, I feed him once in the morn and once at night but think I should maybe go down to once a day?  Also what type of beta is he? They had like three varieties.

I also have trouble knowing how much to give him since I switched to blood worms rather than the pellets we originally bought with the tank kit.  I have read about feeding him an amount the size of one of his eyeballs but it have a hard time telling how much that is with the dried blood worms.

I also am having trouble cleaning all the gravel properly before too much water is gone from the tank with the gravel cleaner I have, is it too big or do I just need more practice at this?  First couple cleaning I did a 25% water change but manage only to clean half the gravel, one half of the tank one week the other half the other week. This third week I cleaned it all but this means I did a 45% water change.

All comments suggestions about my tank are welcome. I want the aquatic life in there to be happy and calm with as little stress as possible. 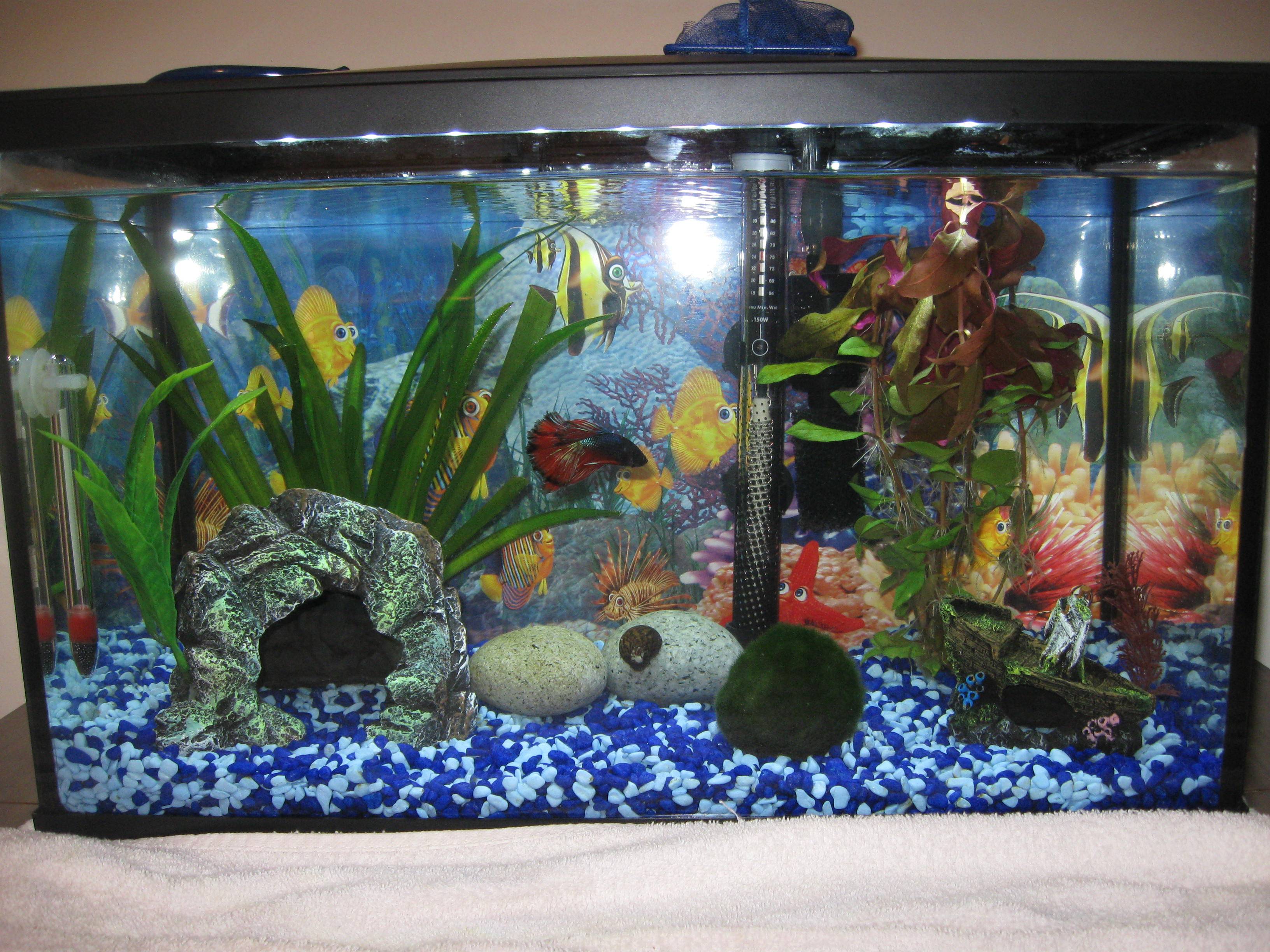 All has been well so far, been keeping up with weekly cleans/water changes. My plants seem to be doing better since I put the lights on a timer and added those 4 amano shrimp, they're doing a good job on the brown algea!

I have read that zucchini is good for the shrimp so have been putting in a few slices, I put them in boiling water first for a couple mins then let cool down so they sink in the tank, and they really do go for it like its a treat.

I noticed my betta likes to nibble on it too...lol  I think he's not impressed with the fact I reduced his feed to once a day instead of twice like I was doing previously, he shouldn't complain though as he eat only gets that bottled dry blood worm stuff and now the zucchini, he really doesn't seem to like the pellets I got for him.

That said I have been adding 10ml of the nutrafin cycle after each water change and have run out.  I am not using the cartridges anymore that came with the filter system but using that mod I posted about in a previous post.

Since I now uses the modded system should I keep adding the tanks start bio stuff or can I stop using that.  I am thinking I should get more as I guess it wont hurt if a add some at water changes so is there one in particular I should get:

any advice on which one to get and also should I keep adding some at each water change or am I wasting it due to my tank being cycled already?

Guy at pet shop said to keep adding some as it help the fish scales stay nice or some such but kinda sounds like he just wants me to keep buying some?


Also quick update on the fluval multi gravel battery pump, it works pretty good. I can start by doing a quick gravel clean using the sock filter thing and then I replace that with some tubing and use it to empty some water, works quite well now that I know how to handle it.  At first it wouldn't pump out water but I found I need to just make sure the tube is going straight up to "prime" it and it sucks water down good.

I'm an old school kinda hobbyist, and of the opinion that none of the bacteria in a bottle works. If you are confident that your system is fully cycled, having 0 ammonia and nitrite, and some nitrate creep, then you certainly dont need it at all. Only additive you may need is a dechlorinator.

Almost all my fish love zucchini! My family knows that so it is standard practice here during dinner to cut off the ends and put them aside for the fish. (Just some extra info: we use mostly the Mexican zucchini which I only steam so no additives that could harm the fish).

Be careful with feeding only blood worms to your betta; they have the tendency to get obese and blood worms are very rich food.

Small grained floating food is normally readily accepted by bettas as well. It might take a few days now that he is spoiled by the blood worms but they can easily survive a few days without food.

It is not necessary to buy the special betta food (too expensive) but other small floating food is just as good.

Similar topics
» Fish that fit in 10g tank
» How do I clean my dirty fish tank ?
» Starfish in a freshwater fish tank?
» Moving fish to a bigger tank
» Good fish to clean tank?