Opinions on tank setups...3 of them!

Opinions on tank setups...3 of them!

Most of you know that I am newly back into the hobby and I know I have fertile aquatic life...lol A little history...I had a (ONE) tank for years way back when and never had any babies!
The beginning of this year I got my 3 daughter's and myself a 10g tank from the thrift store. Had a few issues keeping life for a couple of weeks but for the last month or so I have had great success. I was given a newer 10g tank with lid as my initial one did not and the initial 10g got broken so I threw it. I have rats and one got sick and I lucked out and got a 15g with screen lid at another thrift store to use as a "hospital" cage for her while she was ill and once she got better, my oldest daughter cracked the back side so I replaced that (was a fun experience). In my 10g I had a Black Mystery Snail, 2 African Dwarf Frogs, and a male and female Sunrise Tequila Guppy and planned to set the 15g up for a Hermit Crab.
My female Guppy dropped 40 fry on the 19th, I repaired the 15g on the 20th and then yesterday I picked up a 5g. So now that you have full details on what I am dealing with (Oh, I bought a Water Wisteria on the 20th as well...my Black Mystery Snail thought that was a great snack! and a Gold Mystery Snail for the 15g, the plant came with a baby snail of some sort

)...Anyway...here is my question...I was going to put the babies into the 15g until they are big enough to tell sex of the fry and then separate them between the 15g and 5g...now I am thinking it may be best to put the 2 ADF's, Black Mystery Snail, and mom and dad guppy in the 5g and separate male and female into the 10 and 15g... What does everyone else think I should do? 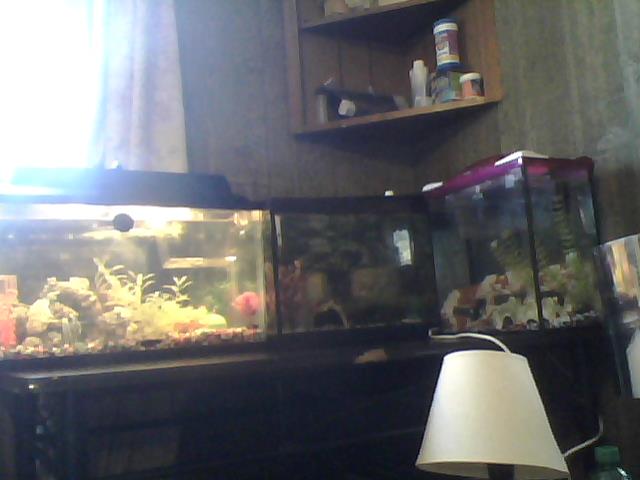 It's a good thing that I had a spare kitchen table in my room aside from the fact that it was holding my 2 rat cages. I live in a 2 bedroom trailer...not a newer one, a late 70's one...so I had a 10g on one kitchen counter and the 15g on the other kitchen counter however, I had no counter space for my toaster or deep fryer and then I was given a 5g. I decided to move my room around and move the tanks into my room on the table. From left to right I have 10g (brightest tank cause it is the only one that has a light) I have the guppy fry in a breeder tank in there along with the Gold Apple Snail. The 15g is beside that one (in the corner) with nothing in it but will be one of the fry tanks once they get a little older and I know the sex of them. Then I have the 5g which currently has my 2 ADF's, Gary (Black Apple Snail) and the mom and dad guppy's. Oh and it also holds another breeder tank with a baby snail (possible Gold Apple). The 5g has no light at this time either. I only have a 50w heater in the 15g as the light on the 10g seems to keep the temp pretty evenly. The 5g seems to stay even as well even though it doesn't have a heater either. I am now becoming overrun by fishies! lol

I am awaiting a response on whether I am taking in 2 red tailed black sharks and an algae eater (some type of pleco, I believe). They do not come with their own tank as the owner is concerned it will soon burst (offered to take it and fix it but she didn't seem keen on that). So I am keeping the 15g empty, well setup and running but nothing in it as I plan to put those 3 in that tank but I am also looking for a 30g for them. I have to say that Sandy, SpongeBob, Gary, Patrick and Pearl all seem quite content in the 5 g...even with the breeder tank (2 baby snail hitchhikers with my Water Wisteria) in there. In the 10g I have the Gold Apple Snail, Blondie, and the breeder tank with 35 guppy fry. We lost 5 fry during the tank moves...I think I accidentally did it myself. Of the fry (a week old today) I can see I have at least 3 females already. Off to take a look for a 30g

I am addicted!!! lol

You won't have the space for anything referred to as "sharks". Very active, need space, tendencies to agressiveness.

For the "algae eater". It's tough to say what is actually is. There are hundreds of different types of plecos (and none are particularly good algae eaters alone, but need supplimented foods), many of which get way too big for home aquarium.

It could be another type of fish too, otos, siamese algae eaters, etc. All of which have different behaviour and needs.

Best to either figure out what you are dealing with exactly first, or avoid altogether.

All 3 are in the same tank at this time, owner just wants to rehome them cause of a chip in the tank. The tank she has them in is a 15g tall...mine is long...however, I would prefer a 30g for them and then I have the 10 and 15g to separate male and female fry into. Idk...she was supposed to be back to me the other night and still no word so maybe she has changed her mind on rehoming them. If she has, that is great...I am beginning to run out of room to put stands! lol

I expect the 15 gallon tank or even a 30 will be unsuitable for those fish unfortunately.

From what I have found online, minimum would be 20g but 55g is recommended. I still haven't heard from the owner so maybe she has changed her mind which is fine with me

Just had a guppy fry eat a baby snail

I had put them in to clean up the breeder tank some...guess the guppy thought it was a snack!

JanesAddiction wrote:From what I have found online, minimum would be 20g but 55g is recommended. I still haven't heard from the owner so maybe she has changed her mind which is fine with me

Just had a guppy fry eat a baby snail

I had put them in to clean up the breeder tank some...guess the guppy thought it was a snack!

What kind of "algae eater" will determine really what the suitable tank size would be. If the "algae eater" is actually something like a common pleco, then 100 gallons wouldn't do. They grow into monsters, despite them being sold by some fish stores as algae eaters, or being suitable for a smaller tank. Even if they start small, one has to think about a fish's adult size (and the amount of waste they produce). Common plecos produce an insane amount of crap, enough to quite easily enough to give themselves ammonia poisoning, particularly in a smaller tank. Some plecos are kept in smaller tanks which result in stunted growth, often something that turns fatal in the long term, as the fish's organs continue to grow, while the rest of the fish doesn't. I unfortunately had one that easily outgrew my 90 gallon in under 2 years.

Perhaps consider asking for some photos of the fish in question, and post here. Someone can almost certainly identify them for you.

As for the algae eater .... it really depends on what type .. but the majority a 30G is too small

As for sharks ... I vowed to never own another one. Ended up I still have a Red-Tailed Black Shark as is their common name.
Got it through a kijiji tank deal. A few things to know about sharks ... I learned these all the hard way.

1. Except for Bala and Rosaline Sharks they are extremely aggressive amongst themselves. Best kept with no other sharks (I only have 1 red-tailed shark for a reason).
2. I haven't found a shark that could be homed in a 30G ... My Red-tailed is in a 55G and is currently 5 - 5 1/2 inches long. It was originally kept in a 20G when I saved it.
3. Red-tailed and Rainbow Sharks are very aggressive .... I've had both and watched a few fish perish.  I call my current one The Bully.

I say these things as words of caution when coming to Sharks in general .... but a 55G is the minimum you do want with them ... and Bala Sharks being more docile require at least a 75G with high current.

I keep the Red-tailed that we have in my most aggressive tank. My 55G has 3 Senegal Bichirs, 1 Synodontis Ocellifer and the Red-tailed Shark. That's it ... and I still see periodic aggression from the Shark ... although it's tank mates tend to put it in place. I've tried other things in the tank ... but have always had issues pertaining to the Shark.

Don't get me wrong ... they are very beautiful fish and somewhat skittish. I enjoy sitting back and watching the flash of red across my tank. Although still regret at times having it as it reduces my choices of tank occupants.
Piece of info the Red-tailed Shark isn't really a shark but actually part of the Carp family.

I still haven't heard from the woman so I won't be taking them anyway. I now have a tank full of snails and a tank full of guppy fry lol And I missed out on the 30g so no empty tank.

Well I guess I was wrong, she just msged me back and asked if I want the whole setup for free. I will take it and look for a bigger tank if her tank is indeed not at least a 55g. I accidentally deleted the pics that she had sent as I thought she had changed her mind about rehoming them anyway, the pic I had of the tank didn't show the full tank and pics are so hard to judge I find. Waiting to get a response on how big it is so I know if I need to start shopping for a bigger tank.

OMG...Looks like I wasn't off on my judgement of how big the tank is that comes with these "sharks" and algae eater...it is a 15g so I am now shopping for a 55g at least. I feel so bad for these poor fish! Hopefully I will luck out and find a good deal again!