While there were certainly topics of this type on CAC, I think it's time we have one here.

I really need to tinker in the tank with the aquascape, trimming plants (and replanting things), and everything else that involves putting your hands in the tank.

I have a job (and other hobbies) that really batter my hands. My hands are often in bad enough shape, that I just don't think I should be sticking them in the tank. For this reason, I picked up some aquarium gloves (for a pretty penny) that go up to the shoulder. I do like these gloves, and they have been useful in some situations, but not enough of them. They are just too thick, I find it difficult to do anything with dexterity, which is a pain when dealing with dwarf chain swords, and many other plants.

Prior to the thick aquarium gloves (really meant for handling things in marine tanks, like corals), I had thought I was really on to something with a product. I had found something in the local farming store that I figured might just work, I found calving gloves. These thin disposable gloves seemed good until I realized they have serious leaking issues, even when you haven't touched anything yet. For this reason I tried wearing even two or three pairs over each other, but it just doesn't work, they still fill with water. The dexterity is there, but it defeats the purpose when they leak.

Has anyone managed to find any good aquarium gloves? If so, where did you find them?

I've never been able to find good ones. I actually get either painting gloves (to the elbow) from the hardware, or dollar store versions.

I always sound like a nervous anxious person when I talk about this. So here is my caveat - you can catch a number of diseases from a cat, some serious. You can catch a few from a dog. That's perspective. You can catch two from fishtanks, and both are rare. That's where the glove seeking comes from.

If you are run down or immune challenged, and if your fish are carrying a disease called [i]Mycobacter marinum[i] (fish tb), it can transfer to humans. Likewise, there is a rare garden fungus also found in some aquariums, that can transfer from objects in a tank. It's a thousand times more common in the average garden, and rare among gardeners, so we'll focus on the first.

Fish tuberculosis is found in the wild, but is rife on crowded fish farms. Most fish carry it with no symptoms or real danger to us. Even if we get it, it's treatable and only causes ugly sores on the back of the hand and forearm, usually. It's not pretty, but six months of antibiotics will cure it. Yup, six months. I've had it, and that's real.

I got it while raising two kids, holding a fulltime job and being the primary family caregiver for a dying family member. I was as run down as a guy can be without appearing in a zombie movie. I had a cut on my hand and I was careless in changing water on one of the most affected species in the hobby - a celebes rainbow. The tank wiped from tb (the fish become listless and rectangular sores appear on their flanks - I now immediately euthanize. For fish, there is no cure or treatment). A few weeks later, I noticed an odd sore form on my hand. A few weeks later, it was off to the dermatologist and then to the pharmacy for an absolute cocktail of tiny pills.

The disease can't live in the warmth of our bodies, and only hangs on in the lymphatic system very close to the surface of the skin.

With fish, it is most common in hard water fish - rainbows, livebearers, goldfish, etc, and in marine tanks. It's sometimes presented as a goldfish disease. It is generally in the medical books as a bacteria caught in poorly chlorinated cement swimming pools - it's a big reason why we zap pools. My doctor was the head of teaching for dermatology at a major university, and I was the first live case he had seen. I diagnosed it - then I had to go on display for a lot of med students. I let them use me for a test - they had to diagnose me....

So you don't need to stay up at night worrying - the parasites in cat litter boxes are a worry - Mycobacter isn't. But since it exists and since six months on antibiotics are no party, you might want to take precautions. I wear gloves if I have a recent open cut on my hands and I want to do work in my tanks.

The only long term effect for me is I will always test positive for tuberculosis antibodies, which in rare contexts could leave me with explaining to do. Old jobs scarred up my hands, and this was good for a couple of small ones added, but that's how hands work.

It's an awareness posting. Open cuts - closed lids or gloves.

wow
interesting Gary!
Thank you so much for the detail
I have my hands in oor tanks alot.......

I once bought the gardening glove kind from Lee Valley Tools (called mucking gloves) as they are very similar to the aquarium gloves but much cheaper. They are also shoulder length. However, they too are thick and thus do not provide good dexterity (thus not good for planting, etc. but handy for things like netting fish, moving rocks, doing gravel vacs). I no longer own these as I managed to tear a hole in the finger of one on some rock in my s/w tank and just never replaced them.

So basically, I now do not use gloves or if I'm handling rocks in my s/w tank, I use cheap disposable latex ones so that I don't risk getting stung by a fireworm (which I have quite a few of in my tank)... however, they do allow the water to get in at the wrist. (Now if they made these latex ones much longer they might be of some use.)

you may be able to get elbow length latex or nitrile gloves online if you are willing to search on sites that sell *ahem* "adult merchandise".

When I brought this up last year in the CAC, I searched everywhere for aquarium gloves. Living in Ontario cattle country I thought some vet calving gloves would work. I found these at the local TSC Store. They were labelled "One size fits all"..... HA!!!!! Sure... as long as you are the size of the Jolly Green Giant! 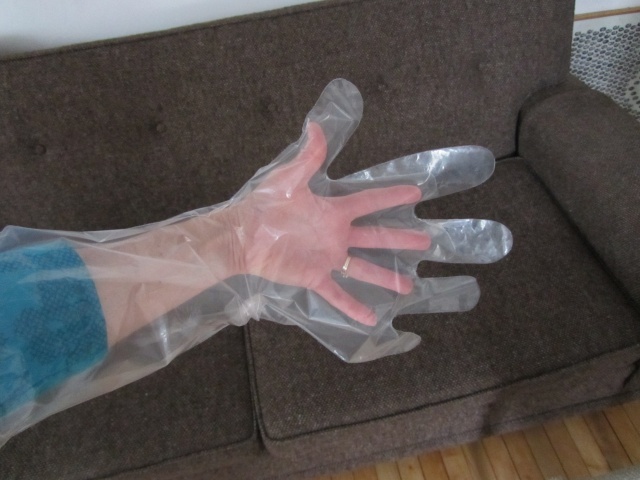 They are probably the same as the ones you found, CAA, because they leaked just by putting my hand in the water. The only thing they were good for was to keep my sleeve dry (as long as my sleeve was pushed up above my elbow).I think they cost my $5 for a pack of 10. I have not searched for any more since I used the last one. I would like to find a decent pair though.

They are lont the long ones but will protect my hand and fingers.

During the '70 I was working on a ranch in the Cariboo and was called out to help with a difficult calfing.
I had to use my hands and arms, no gloves, to push the calf back in and turn it around.

I have your fix for you. Yes they actually make aquarium gloves. The link is posted below if you want to buy some.

mikebike wrote:During the '70 I was working on a ranch in the Cariboo and was called out to help with a difficult calfing.
I had to use my hands and arms, no gloves, to push the calf back in and turn it around.

Mike that is just to much information.

I'm pretty sure someone mentioned these in the past from Lee Valley.

Those look like they might work Steve. I'll have to go to Lee Valley and see if I can find them and try them on. They might be too thick, but it's hard to tell for sure.

Similar topics
» Aquarium Magazines
» Is it possible to never have to do water changes in my aquarium ?
» Build your own aquarium
» Sawdust in aquarium!
» Aquarium Resolutions