We all have some sort of glass jar or plastic container that we have in order recycling bin about to throw out, and think, hey I could use that for the aquarium! Well in general, yes we can but we have to think about it, just a little bit to make sure we have not missed anything.

Here is a common line up, and we will dissect what is good and not good about these containers. What makes for a good container that can be re-used for storing fish food, water changes, holding newly brooded eggs, storing brine shrimp eggs, mixing, and even holding snails. 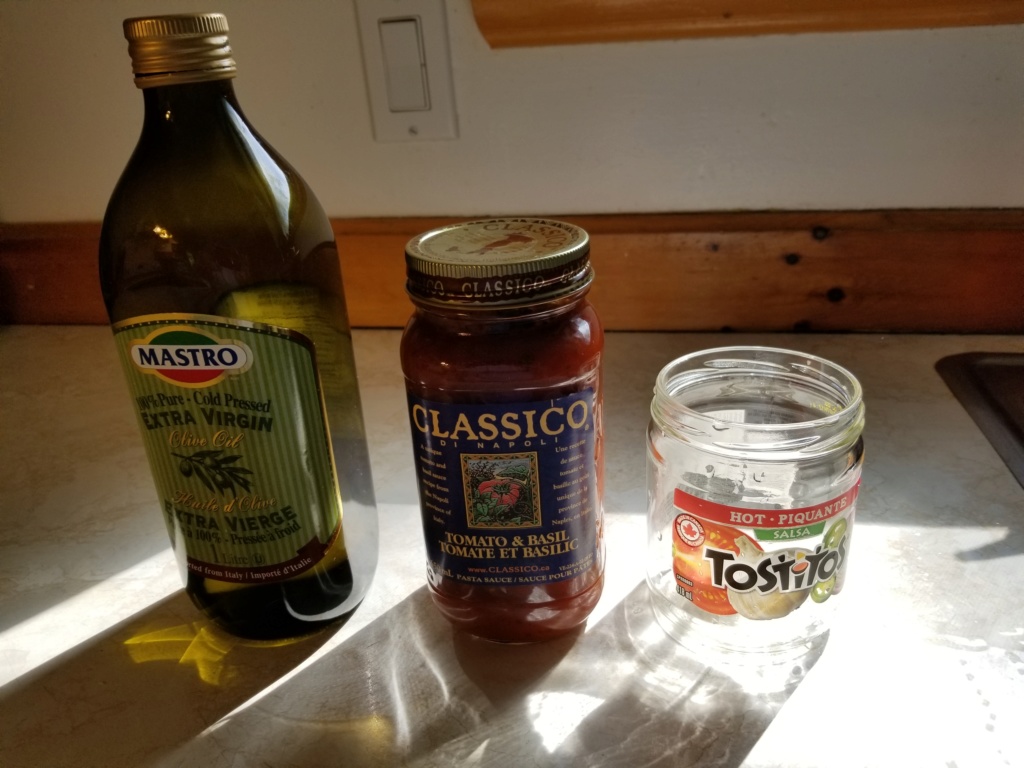 If you soak the labels off well cleaned jars, you can also use them to sell small fish at club auctions.
Classico tomato and basil is not bad for jar sauce, and it is okay for selling killies and small livebearers.
But those nice, smooth, easy to see into PC hot salsa jars are even better.

GaryE wrote:If you soak the labels off well cleaned jars, you can also use them to sell small fish at club auctions.
Classico tomato and basil is not bad for jar sauce, and it is okay for selling killies and small livebearers.
But those nice, smooth, easy to see into PC hot salsa jars are even better.

Excellent advice. Labels are sometimes tough to get off, and hot water is needed to get the glue from the glass, as the gunk gets pretty sticky and collects dirt and debris like flypaper. So the label and the glue are first to go. If this is difficult by hand I use the dishwasher. Glass is inert meaning that it does not absorb nor adsorb anything, so dishwashing is considered safe. It would however soak after in case there is residue.

The olive oil bottle has a great seal on the cap that re-screws itself. The issue is the oil. It is an excellent grade glass, as it is amber coloured to reduce degradation by sunlight. So any liquids which maybe sensitive to light is a good choice. The issue is not the oil but the cap. In the cap itself is a soft plastic coating which absorbs pretty well anything it has come into contact with it. So cleaning the oil will mean hot water, if not boiling. But there is no issue with the oil unless you are storing powder, so any liquid is safe. It is food grade, that is, suitable for human consumption, so safe for fish. The small mouth means that this is most likely used for liquids. And don't forget to relabel once you have put something in it.

The tomato and basil jar is a Mason Jar, with a tight fitting lid. After removing the glue and label, soaking to remove residue in hot water, this is an ideal large mouth container. I use them for storing fish flakes. The issue is the lid which has a rubber or soft plastic coating which must be soaked to remove residue. After that an excellent choice for most uses, and it takes high heat (it is a thick Mason jar that can be used for canning).

The Tostitos sauce is delicious. Since it is a hot sauce, it contains spice therefore the glass is not the concern but the lid and the seal. Soaking the lid, upside down several cycles will remove the residue. This is the same situation with pickle jars, they seem to smell like pickles after you have cleaned them. It is not the glass jar, but the lid. 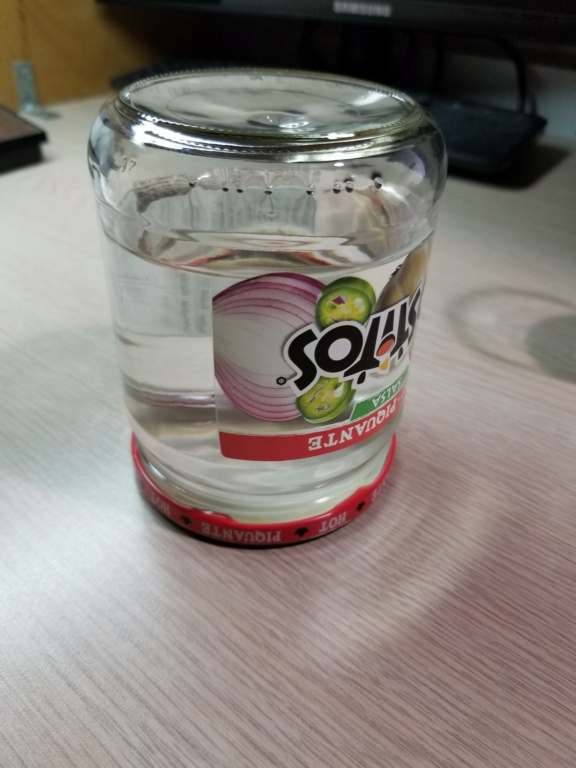 Soaking upside down to remove residue from the Tostitos lid. Hot water does wonders but takes a few refills to remove the residue. The Tostitos were great by the way. 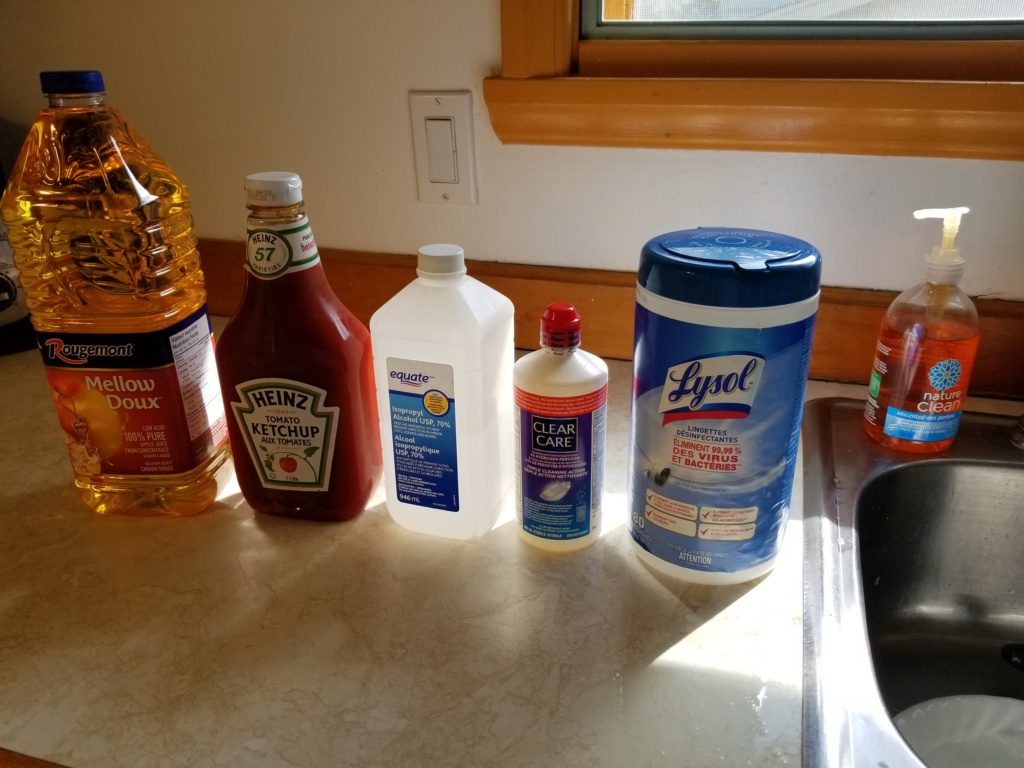 Next cast of characters. What is your guess on these ones?

Let's start with the Apple Juice.

It is a single plastic that needs to prevent oxidation, because as you may know apple juice can become apple cider. Not a toxic substance, in fact super delicious and not an issue if your fish drink a bit. The plastic itself does not retain any properties of the juice so no leaching, no toxins will be released. The cap is a harder single type plastic, and non-toxic. So overall the apple juice container would be great for hatching brine shrimp (cut out the bottom, poke a hole in the cap for the air line), holding a litre of water, and any solution for aquarium use.

The Heinz Ketchup bottle is a marvel of plastic technology

In fact the Ketchup bottle not only has to control acidity it has to retain the freshness and taste of the ketchup. Several technologies are involved to meld plastics of various compositions to create the ordinary plastic bottle. Consider it the most non-permeable, air tight container available. As for what you can use it for, think of where you need to retain freshness. It is one of the strongest composite plastics available, considering all other available containers, so this is an "iron-man" strong container that will take on bruises and banging. I was thinking that this would be an excellent shell for transporting fish in the mail. If you cut out the top it is strong and lightweight. For holding material, it probably rivals glass jars. It could be a great substitute for anything that you would put into a glass jar but were afraid of breakage. As this is a food substance (ketchup) there is no issue with toxicity, and the plastic would not leach since it is meant to retain not absorb contents.

A single composition plastic, soft and lightweight that holds a toxic substance and prevents air oxidation of the alcohol. Once the alcohol is exposed to air or mixing with water it eventually degrades to carbon (C), oxygen and hydrogen after several reactions over time. At first the alcohol will act as a disinfectant at concentrations of 70% w/v and is great for sanitizing, disinfecting and would sterilization. Rinsing with hot water with totally remove the alcohol contents. As the contents completely break down there is no toxicity with use of this bottle. However the cap will contain a paper seal, or metallic seal which should be removed to ensure that the cap and bottle form a complete seal. Great for storing non-toxic liquids, diluted medications, etc.

These disinfectant wipes have flown of the shelves since COVID, and if you can get some of these wipes you are lucky. For those who think the container, with it's nifty dispensing lid and large open mouth would be great for use in the aquarium, think again, and throw it away. The contents contain chemical formats known as "quats" (see other article on disinfectant wipes). These quats not only leave reside they are formulated to persist for a long time, which makes the disinfectant much more effective as a killing agent. Even when dried, the residue acts and can kill. The plastic itself adsorbs the quats, so even if you rinse it out, you have a danger of toxicity. If you want to use this container, it will never be rid of the residue and may leach out with contact with water, so reserve for uses like a garbage bin (where it will deodorize), dead plant, dead animal collector (which are then thrown away). It is better to keep these disinfectant wipes and the containers away from aquatic life and your aquariums.

The soap container with pump dispenser (in the background)

This is a harder type plastic with a neat pump dispenser which is great for the bathroom and kitchen soap, but a real non-no with aquariums. In general because it contained soap and detergent, best to avoid.

Similar topics
» Aquarium Resolutions
» Can I use tapwater in my Aquarium ?
» Snails in the Aquarium
» Where Can I Buy Aquarium Trim?
» What does a filter do in the aquarium ?