Do they like having sand or do they prefer gravel?
I moved one from a gravel bottom tank to a sand bottom and today, it seems he won't touch the shrimp pellets once they hit the bottom.

He could be adjusting to the new colour, or simply to the new tank. See how it is in a few days.

I did see him eat today from the bottom with no issue.
But his color is off to me and he now has red spots on his big, lower fin & on his dorsal. 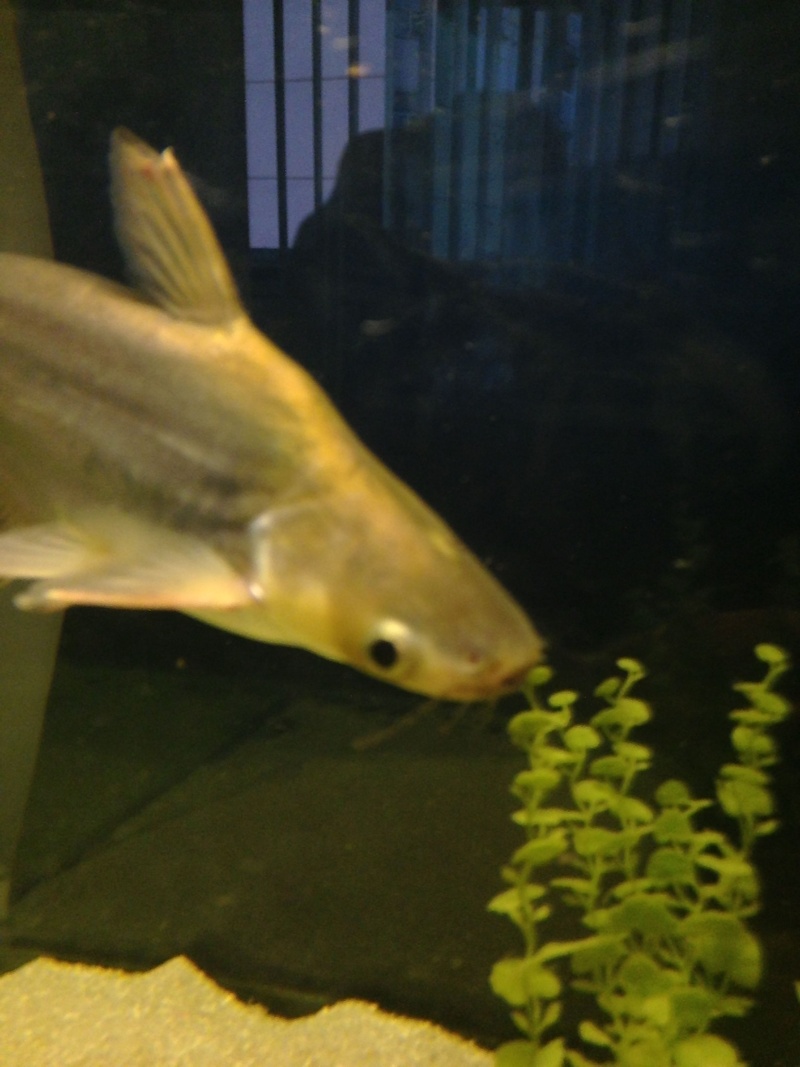 That looks like an infection. Beyond that, I can't say much.

Put some Melafix in the tank, enough to cover the 125 gallons.
I did notice that the spots are not as red as they were before. So maybe he's pulling out of it?
Not sure as I have never encountered this issue before. Coloring of the shark could be stress since he is now with a Koi & fantail?

Hope he pulls through for you. Sorry I can't be of much help to you otherwise.

With luck, it's an injury from his being moved, and with very clean water, it will clear. Sometimes it can be internally generated, but without seeing it, there is no way to tell from here.
How do you work the different temperature needs? Is it too warm for the koi and goldie, or too cool for the ID shark? It's a strange longterm combination of fish.

Water change was just done this past Friday & the shark was moved on Saturday. Temp is around 77F which, from what I have read in several places is a decent temp for the koi & fantail.

The only REAL issue I have is the koi is a pig at feeding time. I try to make sure the ID gets some food as well.

Question on melafix and dosing. I know it's daily, but is it once every 24HRs or at least 12HRs between?

I'll be the contrarian. The active ingredient in Melafix is a proven antibacterial, but at the concentration it comes in in that product, it might as well be homeopathy. I really don't think it does anything except make us feel like we are doing something.
Plus, if that is bacterial, it is internal, and Melafix claims to be for mild external problems. If it's a wound, it can't hurt, I guess.

If it's bacterial, what would you suggest?

In an update on the shark: he is eating as he normally would and also tries to steal some of the food I put in for the koi/fantail. He swims around just fine as well, even though his eye sight seems to be less than normal.

My wc schedule is tomorrow, so will do both tanks for that.

I think I have enough melafix left for one more dosage for today. So should I wait til tomorrow to do the WC?

Well, the shark WAS starting to go back to his silvery color. But the last few days, he's started to go back to that yellowish color again & his stomach has been really bloated for 2 days. I don't want to feed him as that would just make him explode.
Any ideas?

I have an empty 30 gallon tank that I can make into a hospital tank with the AC500 and aquarium salt as well.

I think he needed a long, high current tank with no inappropriate tankmates like koi or goldies, which should never be mixed with tropicals. If his belly is bloating, that is usually a sign (with the fin streaks) of septicemia. Salt won't touch it - it's an internal infection. If you could specifically target the bacteria, he would have a slight chance, but coming from a no aquarium antibiotic jurisdiction, I can't make a suggestion.
If he rallies in the small quarantine, soon after you return him to that tank, the same problem will hit. He is a genetically large, pacing fish being kept in a tank with two waste monsters that should be ten degrees cooler. The decomposition of the enormous amounts of waste from the carp is accelerated at 77f.
The 'shark' is a shoaling, sociable fastwater fish that needs very clean water, as was discussed a while back, and as a species, is too large for even the largest home aquariums. I don't understand why ethical petshops sell them - my local shop won't unless they are special ordered.
If I put one ID shark alone in my 120g, 6 foot tank, with two of the largest Aquaclears and a large volume sponge filter (my set up right now), with accelerated water changes at 50% twice a week, I would expect the fish to live about a year. It's just too big for such a 'small' tank. That tank would work for a large, territorial Cichlid, but a racing fish like a 'shark' is always another issue. It's not just size, it's behaviour.
I'm not optimistic, but here's hoping for a bit of a miracle.

GaryE, before I moved the shark over, I googled to see what others from a few other sites were saying & they said they should be fine. They are getting along & the shark is swimming around like he did when he was in the 130 g.
What fin streaks are you referring to? The red spots he had prior cleared right up with no visible signs of any redness anywhere. I finished the Melafix dosing, just a bottle worth and he was getting his color back til just a few days ago. Could it have something to do with eating some of the food I use for the koi & fantail? It's Hikari Lion head sinking pellets with 45% protein.
The 125 g tank does have a current with the 2 HOBs at either end.

As for only living a year, our first ID has been with us, in the 130 g for the last 3 years or so now.
I don't want to move him back to the 130 if what he has could transfer to the other IDs or the plecos, if he has something. Plus the stress of yet another move may just kill him.

I did notice the other night, it looked as if he wanted to try & eat a small stone that was in the sand. He kept "sniffing" at it.

EDIT: Just looked at some pics of fish with septicemia and the shark has no red anything anywhere on it's body. 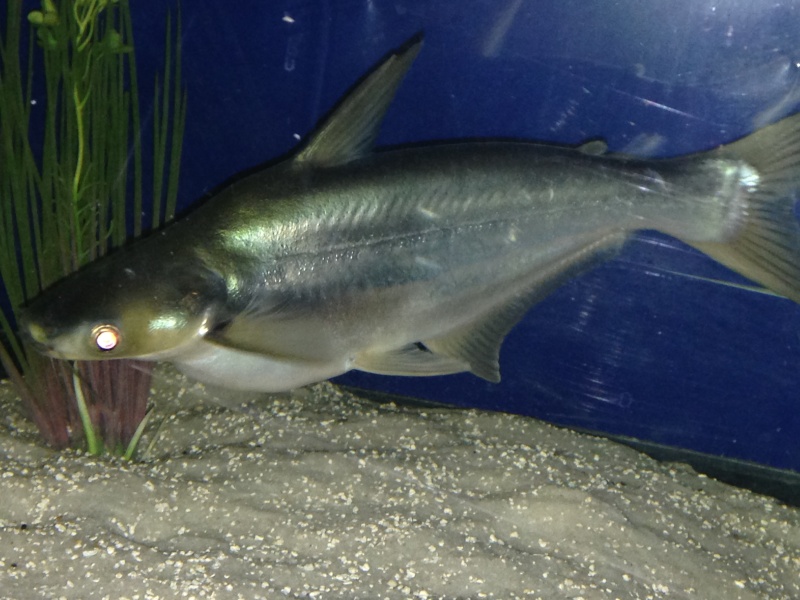 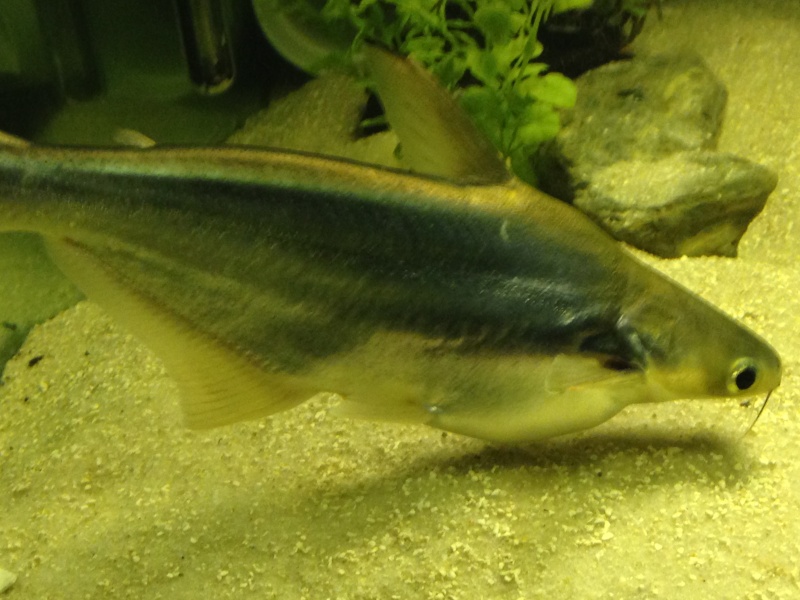 As you can see above, he has no redness of any part of his body. His hunger for food is the same as it always was and he always seems to be looking.

His bloating does seem to be reducing a bit & he still eats like he always could. Before his initial move from the 130 g, he was mostly silver, pretty much the color he is now, just lighter.
Now, the one that we bought with him is almost solid black.

I do still plan on moving the female pleco over at some point.

He seems to be getting darker, but is still bloated. He still eats. Saw him steal some of the Hikari lion head pellets.
I wonder if it's something to do with that?