I was in an lfs this afternoon and saw a beautiful fish in one of their show tanks. I asked the responsible person whether she knew the name of the fish and she proudly said: yes, it is a rasbora alexi!

Well, you guess it: I have been looking up this fish in internet and there doesn't seem to be such fish!

Here is a phone picture of it. Maybe somebody recognises it. It is the fish swimming to the right, left from the harlequin. 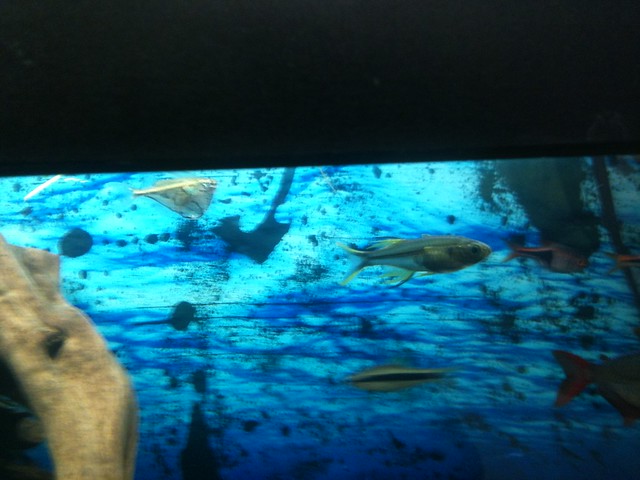 looks almost like a p. furcatus maybe a rainbow of some sort? Furcatus/ threadfin?

Yep! Looks very much like it. This one had a bit more of a lyretail and was somewhat stockier but all fish in that tank were big and stockier than you'd expect.

Thanks! Nice fish and great for our Montreal water!

If I am looking at the right fish, it was Telematherina ladigesi, but I believe it was moved to another Genus. It is a "rainbow", but from a different evolutionary pathway. They have probably been a freshwater species for only a few thousand years, and really need a high mineral content in their water.
They used to be really common in stores, as a more expensive shoaling fish. I bought some a long time ago and bred up a tankfull - it was really beautiful. Males are spectacular.
Alas, they have become less common as they have very little resistance to fish tb, and that great Asian factory farm disease has decimated them. They are known as serious carriers of that pathogen. When I had my little bout with fish tb ten years ago, that was the species I caught it from.
I just looked it up in fishbase - Marosatherina ladigesi. Most fish sources still use the old name as it was popular under it.