Both Callie's tank (10g, she is a panda cory who shares the space with trumpet snails) and the guppy tank (20g long with two guppies, leopard ramshorns and trumpets) were both crystal clear last night. This morning before heading to work, I noticed that both tanks were VERY foggy/cloudy. I could just barely see Callie, and I couldn't see the guppies at all.

It has been very humid in that room, usually between 66% and 78%, and so, at first, I thought maybe it had to do with that. After thinking about it though, I realized that this explanation made no sense. All of the other tanks in the room are crystal clear (the 220g with barbs and loaches, the 36g with tequilas, the 10g with mosquitos, and the 3g with 'pest snails'.

Did a 50% WC in both tanks, and now hours later, it really hasn't improved. Based on what I know, this can happen in new tanks, but that is out as neither is a new tank. I also read that this can happen after a WC, but there water had not been changed since last Sunday. Did a water test and ammonia and nitrites are 0, while nitrates are 5.

Callie's tank gets little light (no aquarium light on her tank), while the guppies have their light on for about 5 hours (most days - this tank has no timer, and so I sometimes forget to turn theirs on).

I am a little freaked out not knowing the cause. Not the best pics - took these with the iPad, but maybe you can get the idea from them: 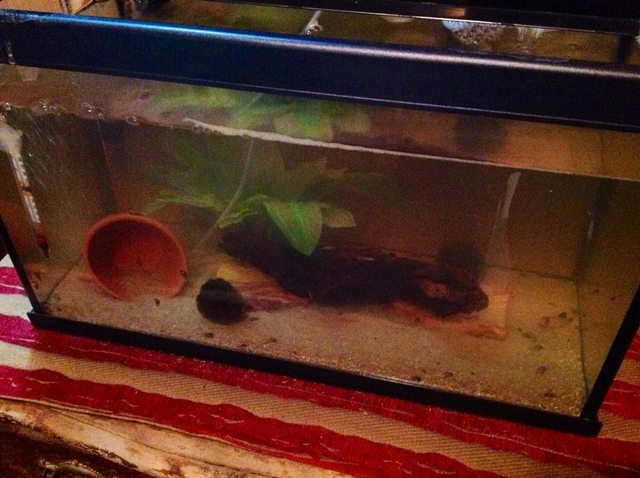 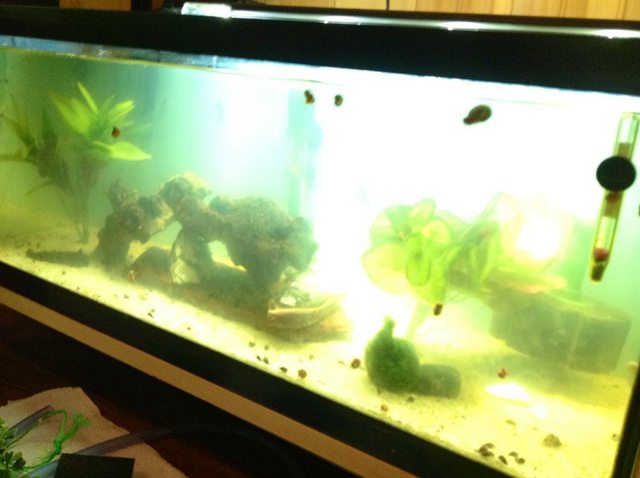 Edit: just had a thought, may be related, or may mean nothing...the two tanks that are cloudy are not planted....all plastic plants....all other tanks are planted, with the exception of the 3G snail tank, which has nothing live, and the tetra tank, which only has one sword....all tanks have at least one moss ball.....

Today, it looks like there has been some improvement in Callie's tank, aloing with a very tiny bit of improvement in the guppy tank. What is now freaking me out is that the guppy tank has a slimy film of some sort all over the glass and in the filter (we checked Callie's filter - same thing).

Also, when I turned on the lights for the tetra tank upstairs, their water has a slight bit of cloudiness to it - but the more worrisome part is that their tank too has this slimy film-like stuff all over the glass and in the filter. WC day is tomorrow, but given these odd events, we changed all of the tanks today instead.

Any thoughts at all on this? I'm worried, but I have no clue what, if anything, I can do...

Hard to say. I am thinking blue green algae. Increasing circulation to improve oxygenation. I am fighting a bad dose in one of my 20s right now.

alexmtl wrote:Hard to say. I am thinking blue green algae. Increasing circulation to improve oxygenation. I am fighting a bad dose in one of my 20s right now.

Thanks alex. We are also leaning toward some sort of algae bloom. I just can't figure out why these three tanks suddenly have this. Does it make a difference where they are the ones that are not planted?

Fish all seem fine, so I'll wait it out and hope for the best!

I was definitely thinking about lighting or water circulation. Is there a common difference in either these areas with the problem tanks?

Hope it clears up,

If it makes you feel any better, my garden ponds are experiencing their annual algae bloom this weekend. The water has turned right green and the fish have disappeared. Should be over by the end of the week and we can see the fish again.

I do hope this is nothing, for sure - if it is a simple algae bloom that will go away - I'll take it!!!

The only main difference I can think of is that none of these tanks are planted - all fake plants (with the exception of moss balls). As for lighting, the 10g gets little light (no tank lights, just a table lamp next to the tank), the 20g gets about 5 hours a day, give or take (this tank does not have a timer, so I am not always consistent with getting the lights on for the full 5 hours a day), and the 55g usually gets about 7 hours of light a day, but since the renos started back in January, this too has not been consistent as they are covered over with a sheet quite a bit.

This all happened suddenly, really overnight. I am at a loss as nothing has changed over the last few weeks...could it be something to do with our water (although, if that were the case, I would think something would be also happening in the other tanks) or something to do with snails (but, again, the "pest snail tank" looks fine?)? Maybe the other tanks will also start showing signs soon as well...who knows?

Callie's tank is almost back to normal now, still a tad bit of cloudiness, but way better...the others look the same.....especially the slimy sludge - I cleaned it all off yesterday on the 55g, and it appears to be back tonight....

Ps - the slimy sludge on the glass and in the filters is more white in colour, not green.

If the cloudiness is algae-oriented, it will be green, as in "green water" that someone mentioned in their pond.  This is caused by unicellular algae feeding on organics in the presence of light.

White or off-white cloudiness is not algae but a bacterial bloom, but here too brought on by organics.  Common in new tanks because tap water (perhaps surprisingly to some) can be very high in organics and when dechlorinated the specific bacteria multiply very rapidly, clouding the water.  This can also be the cause after cleaning filters or a water change, or in the latter it can be due to microscopic particulate matter in the water itself.  This can sometimes occur after very heavy and long rains at least here in Vancouver.

I don't see anything in your data that stands out to explain this...

Yep, it seemed to match a bacteria bloom of some sort as the water was cloudy, not green. Still not sure of the cause....may never know! These were not new tanks, filters had not been cleaned out prior, and the last WC was 5 days before. Ahhh well, the tanks are pretty much crystal clear again, no sludge on the glass, and fish are happy

Well, I now at least know that this has nothing to do with whether or not the tank is planted. The guppy, panda cory, and tetra tank have cleared up completely - but now the tequila tank is cloudy (which is planted)!!