Aquascape DOES make a difference in fish colors!

Aquascape DOES make a difference in fish colors!

I have a ten gallon on my hutch and it was from my initial "glo fish" purchases so it had the hot fluorescent mixed color gravel and quite a few brightly colored fake plants.  I also had a small castle in there.
Fish inhabitants were a dozen neon tetras, Bart, my red, white and blue Betta and a bn pleco.  The tank was lit with a single Marineland LED unit, which includes blue as well as white light.
I thought it was nice, but looked like something was missing.
Last night I changed it out with the new 20 g long.  I used the basic various colors of brown gravel that is cheap at Petco and Walmart.  I kept the silly castle, but instead of all those bright colors I used a nice piece of driftwood and all real plants.  Kept the same light, although a few inches short, it works well enough.  Of course, being newly set up, the fish were scattered all over and everything was covered with air bubbles so I wasn't impressed last night.
When I got home from work tonight the very first thing I noticed was those neon tetras... they looked HUGE and looked like they all had "real" lit up stripes of blue and red.  Beautiful.  The castle even looked okay and in my planting I somehow even ended up with what looks like a path to the castle.  (If I had tried to do that I could have never pulled it off, believe me!)
I actually found a before photo so I took an after one.   Absolutely a case of less being more!!!

Before, my gosh, I didn't realize it was that awful, you can't even see the fish!!! 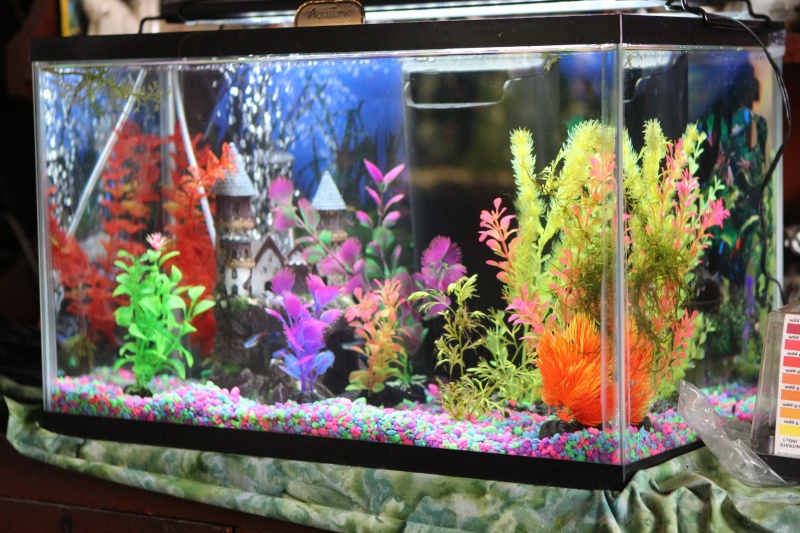 And, after... amazing, there are really FISH in that tank!! Sadly, my photo doesn't do justice to those BEAUTIFUL "electric" Neons, but... 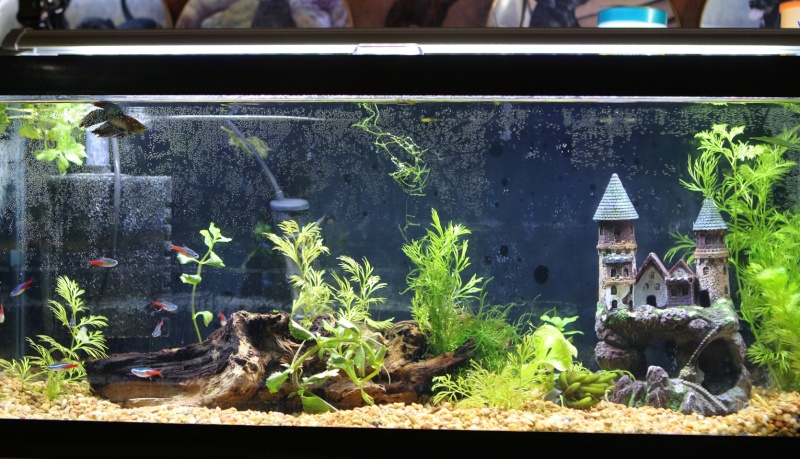 Many of the colours our fish have are under their control. They are used for camouflage, signalling and communication, so the fish has to be able to adjust them to their environment.
If you want to see the brightest colours, paint the back of your tank black. If the open clear glass is a window to a room, and you are a fish that doesn't know what is swimming in that room, would you turn on your brightest colours? You might as well stick a "free food" sign on your back. If the back of the tank is darkened, then the fish thinks cover is at hand and feels it can light up safely.
Darker gravel also helps, as the fish adjusts to camouflage itself from predators above. They match their colours to their environment.
If you can get a dark background, dark sand, decent lighting and taller plants creating shadowed areas, put your shades on.

Interesting, since I DID use a black backing paper for the back of this tank! I absolutely LOVE watching my fish and seeing them change colors for various reasons.
I have those Serpae Tetras... I recently put four bright orange/red MALE swordtails in that tank because I love watching them. Anyway, the serpaes will actually darken their colors as they swim near the swordtails and get really red, then lighten as they go back toward the gold tetras and black neons. Amazing! I was disappointed as they were not nearly as red here as in the store.... no surprise to me now since that tank is on a table IN THE MIDDLE OF THE ROOM, with open glass on all four sides!
All we humans can do is blush once in a while!
Gary... thanks for the information on those gold tetras... almost all of them have lost most of their gold coloring except on their heads... I am sure glad you told me that might happen!!!! The little tiny one is still all gold though, probably more parasite for his tiny size?
I feel like a wide eyed little child watching and learning about all these fish!!!!

These things fascinate me. Once you start watching and seeing what happens - the communication by colour, or the communication by chemicals (we don't see it but we see the results), it can lead to a lot of learning.
With human hand-sized Cichlids, you can learn to communicate with them during their territorial displays, using your hands. It's a great fight stopping thing. You look insane, but it works. You can actually direct them around the tank via hand signals, if you 'speak' their language.
I figure if there are scientists now proving that Gambusia can count via experiments, then the old "stupid fish only remember for 30 seconds" myth is toast. There is stuff going on in our tanks that we only see the surface of.

Small surface fish fear birds. If you have the tank low and lean over, you will really mess them up. I'm 6 foot 3, so I can accidentally be Godzilla all the time. If a tank's on a lower rack, I give it some floating plants, or even some floating wood. The change in fish behavior is instant. You might think a fish is dumb for assuming you have predatory fish lurking behind your couch or seagulls on the ceiling lights, but nothing in their evolution has prepared them for life in a glass box in a human living room.

If you consider their world and try to adjust to them, you get results.
You've got to try to see it from their point of view. Wait til you start watching underwater youtube clips of your fish in the wild. You start aquascaping a bit differently. It's fun.

I was a classic really sick kid in a tough neighbourhood, and I had to become a people watcher to survive. We often act like fish. But I guess that fly on the wall perspective is what got me fascinated with aquariums at the same period, and here I am, decades later, still watching the parades go by.

I think back thirty years or so ago when I had the angel fish breeding project I was just plain too busy to look at the fishes world. Now that I am old and tired, I spend HOURS just sitting and watching them.
I have a big bankers desk with a huge chair on wheels... within a circle around me I have SIX different tanks and can see two more thru a doorway. I just turn my chair in a circle and watch!!!
Unfortunately, I am a bit OCD so it's hard to relax because I keep seeing a plant that needs trimming or an ornament that needs moving or, or, or, but it sure beats TV!!!!

Sounds like a great set-up! I didn't quite think things through with my tank placement, and now I spend a lot of time sitting on my living room floor watching the fish. Kind of wish it was a bit higher up.

I'm always amazed that fish actually learn to beg for food from humans as we pass by. It can't be instinct - how would they associate the strange giant creature approaching from the side of their glass box with food appearing, unless they are learning from experience?

I have livebearers that in most years (not this one!) get out into the school pond by the end of April. They come back via my trusty fish traps in October.

After months outside on natural food, and with their occasional flake coming from a different container, when they are back in the aquarium I lift the old, indoor food container for the first time, all the fish charge the glass and start striking at the surface. They learn. They have the ability to remember.

Oh yes, they sure do. My goldfish go out every summer and come back inside for winter.
I rarely feed them outside, but they know when I walk up to the pond versus a stranger, and are waiting to be fed when it's me or are hiding with a stranger.

I've read that the recognition isn't visual, but is based on vibration as we walk. I don't know how that conclusion was reached, or if it is a fishkeeping urban legend, but it does seem to make sense.

What a lovely tank transformation! Your fishies must be so happy!

Super transformation! Glad you switched the clown puke substrate to a more natural one. Fishes will be wayyyyy happier now that they have a real living environment!

The more natural look is definitely my preference. Great improvement. I still have blue gravel in my 29g. The natural stuff is sitting there waiting for me to have time to switch it in. Your change has given me more inspiration to do that. Hopefully by summer.

I love the new look of your tank. Amazing the difference. One day I would like to switch out my gravel for black, and maybe cover the back wall in black.

I have seen a lot of images with the black, and the fish really do look more colourful in this enviroment.

And the real plants in your new tank look great. Love the castle too.

Instead of painting I use black plastic, the one that you can buy on a roll by the meter. The advantage is that you can easily remove it or replace by blue when you want to.

Living in an apartment means it is also not so messy doing it.

It's interesting to watch fish swim among real plants. The fish stand out much more in their natural background.

As for fish controlling their colors. All seem to do it to a greater or lesser extent. The most extreme I've ever seen was in the Barbelled leaf fish I kept. (they did it for hunting purposes).

Here are some references to how it works.

Similar topics
» Please vote for my aquascape in this contest
» smart fish, dumb fish, pink fish...um, what rhymes with dumb?
» Does this make sense...
» How to make a cave
» Air stones and the noise they make